Do you believe in soul mates?

Rian O’Malley knew the minute he saw Liadh O’Neil that she was the missing piece of his puzzle. They would be together forever. The only problem, they were both five years old at the time. When Rian lost Liadh, he shut away a part of his heart and no woman ever managed to capture the piece of his soul that belonged to Liadh.

Do you believe in true love?

Rian O’Malley is all grown up. Life is good as a sexy brooding multi millionaire businessman. Being CEO of the O’Malley Caribbean resorts affords Rian every luxury, but in love Rian is guarded, the guise of cheeky carefree playboy hides the depths of his fractured heart.

Liadh O’Neil is back in town.

Scarred by the fire that changed her physically and emotionally, Liadh O’Neil is changed. Although broken on the inside, outwardly Liadh is a confident and professional woman. Can Rian break through the façade and find the real Liadh? Old friendships are rekindled and old adversaries resurface, soon Rian must fight for Liadh’s life as well as her heart.

The magic is still there, the chemistry too hot to deny. Can Rian break down Liadh’s barriers when his own walls seem so impenetrable?

The curtains were pulled so tightly that not even a sliver of light entered the room. Only the soft glow from the fireplace illuminated a small area of the bed and Liadh stood naked and proud as she watched Rian slowly undress. As his cock sprang loose from his tight black cotton boxers she breathed in sharply. So magnificent a sight before her, she almost lost her composure. His skin had beads of sweat that shone like diamonds on his skin, and she could smell the muskiness of it as he took off each layer and dropped it beside him onto the wooden floorboards.
Rian walked towards her and kissed her full and hard on the mouth, he pulled her in close to his body. Liadh could feel every inch of him hard and wet. She was enveloped by the blackness of the room, the serenity of their secret place, intoxicated by the scent and shape of him, the feeling of his coolness against her warmth. His mouth, his lips, his tongue, all known to her and so precious. Liadh returned every movement, replicated every touch he lavished upon her. Abandoning any semblance of reason or fear she grinded against him as the tip of his cock banged over her pussy tantalising every piece of her.
He held her face tightly and deepened the kiss, his tongue probing into her mouth, his teeth nipping at her lips as she moaned loudly into his mouth.
“My mouth wants your cock,” she mumbled into his mouth. Rían stilted suddenly and she felt his breath coming in short bursts.
“Are you sure, I mean I don’t want you to feel you have to do…”
Liadh pressed her fingers to his lips “Shut up Rían, I want you in my mouth. Give me what I want.”
His mouth was dry so he just nodded at her. Whatever she wanted she would have. It had always been that way.
Rian lay back on the bed and threaded his hands behind his head. Liadh gripped the base of his cock in her hand and traced her tongue up the length of it, twirling it around the head, teasing him, owning him. Rian’s hands flew down to his sides and he gripped either side of the bed, his lower torso rising slightly off the bed to meet her tongue. She felt him tense and jump slightly with the intensity of feeling. His body writhed from the touch of her mouth wrapped around his cock, so warm, so soft. Her hand wandered up to his thighs and she spread them kneading the inside greedily between her fingers, as her mouth continued to suck on him in a steady rhythm, fast and then slow. Twisting her mouth left and right she teased him, tantalised him until he was moaning and begging her to stop.
“Liadh…Liadh you need to stop lovey, I’m gonna come Liadh..Oh Jesus!”
Liadh looked up at him wiping her mouth with the back of her hand.
“Then come Rí, come into my mouth. I want to taste you. I want all of it.” Rian bit his lower lip and bucked beneath her mouth as she brought him to the cusp of an orgasm. Smiling at him she bent her head one last time, gave one last suck as he exploded into her mouth holding her hair tightly between his fingers. He didn’t shout out, instead he shook and whispered her name quietly over and over again. Liadh loved it, the sense of control that washed though her. She had done that, she had given Rían pleasure, and she had made him weak and helpless in her arms. She laid her head on his thigh as he caught his breath and rubbed her hair gently. The taste of him, the smell of him captured in her mouth and on her tongue, she was even hotter for him. 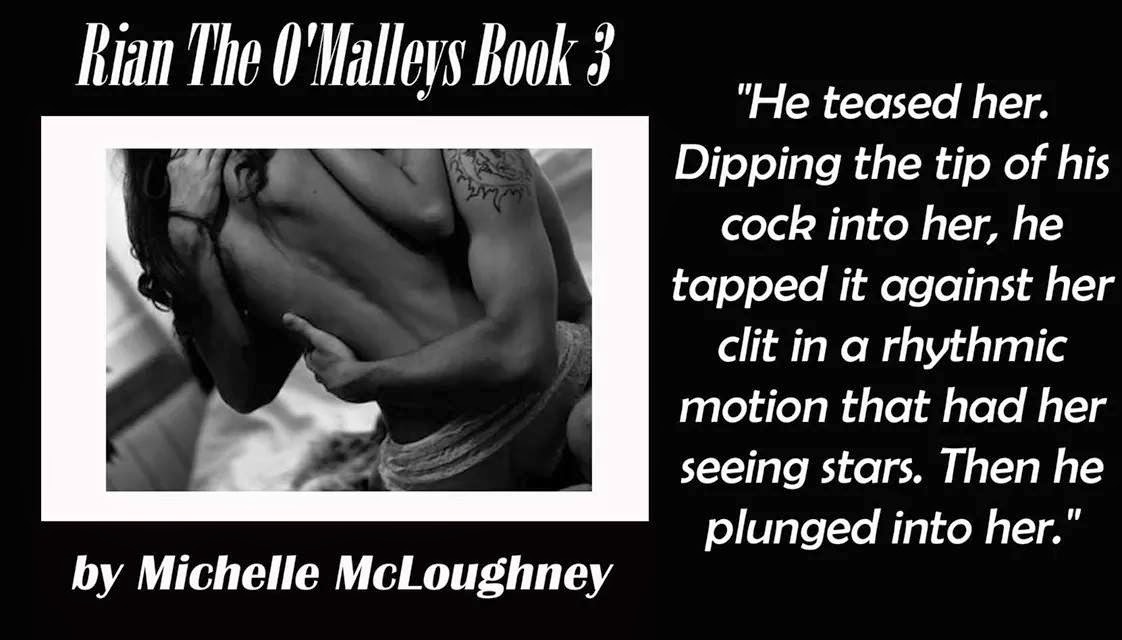 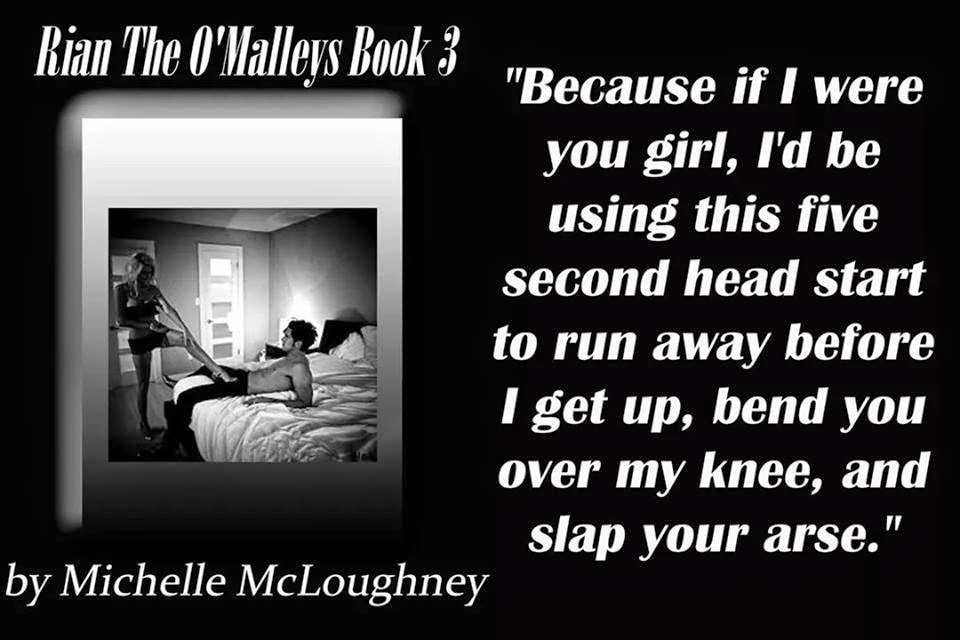 Oh I loved this book. It reminds me of Sweet Home Alabama how you never know who you will fall in love with and when. Rian and Liadh were best friends when they were kids inseparable, but one tragic day tore them apart. They lost contact and after years apart Liadh has to go home because she had no idea that secrets that were revealed will bring them back together. However just because there older doesn't mean there is still a connection. Not everyone is welcoming her back with open arms and people are still terrible even as adults and poor Liadh will find out just how bad. Can Rian save her and make her see the good in people and the love they use to share or will she be destroyed and leave her home again? 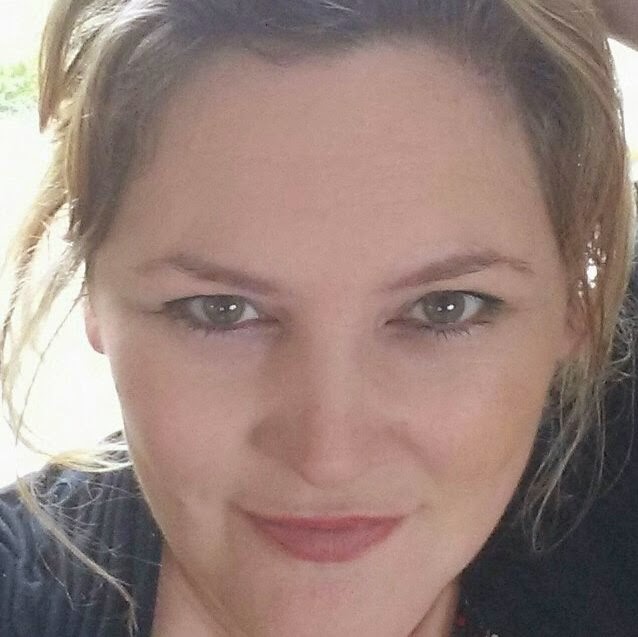 Michelle McLoughney was raised and still lives in the south west of Ireland, where she runs a Montessori school. An award winning poet, she began writing her first adult romance over a year ago. Being a lover of all things romantic, Michelle just loves a happy ever after. She likes to write strong but loving male leads, and their feisty and funny love interests. When she is not busy daydreaming, plotting or having conversations with her characters; she likes to indulge her addiction to Netflix, usually accompanied by chocolate and wine. 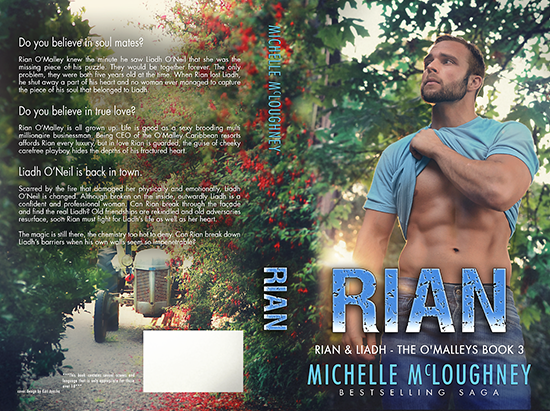