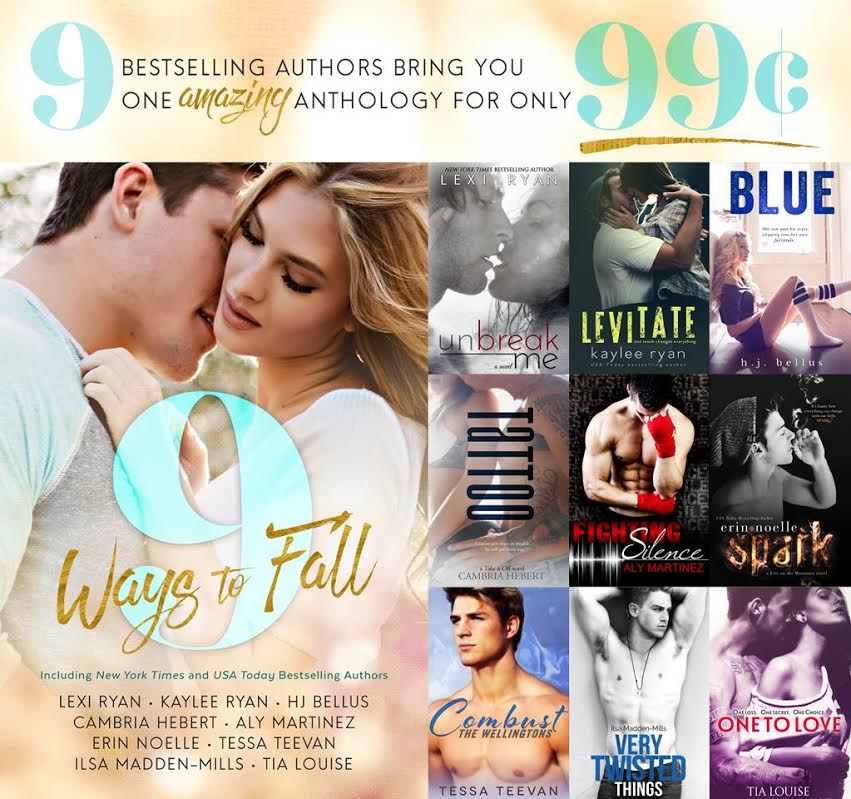 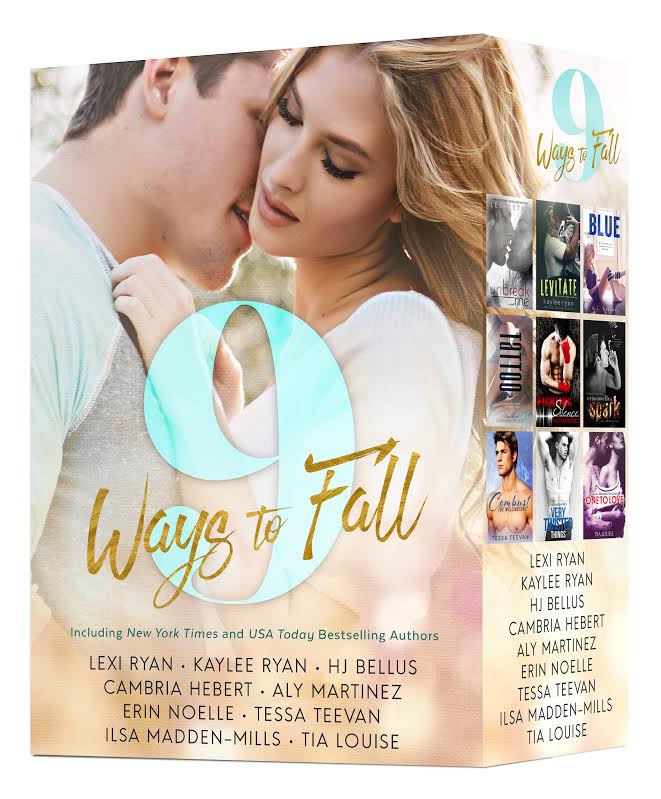 9 WAYS TO FALL (An Exclusive Collection of NINE Red-Hot Romances by bestselling authors, featuring Alpha Males, Fighters, Rock-Stars, Movie Stars, Sexy Bad Boys and more)
by Lexi Ryan, Kaylee Ryan, HJ Bellus, Cambria Hebert, Aly Martinez, Erin Noelle, Tessa Teevan, Ilsa Madden-Mills, and Tia Louise
What's unique about this anthology?  Well....most of these titles have NEVER been in an anthology and a few are very recent releases, not just first books in a series.  The authors really worked hard at making this collaboration ONE OF A KIND!
NOW AVAILABLE
ONLY $0.99
ONE-CLICK NOW - THIS 9-BOOK BUNDLE WILL BE GONE OCT. 1!!! 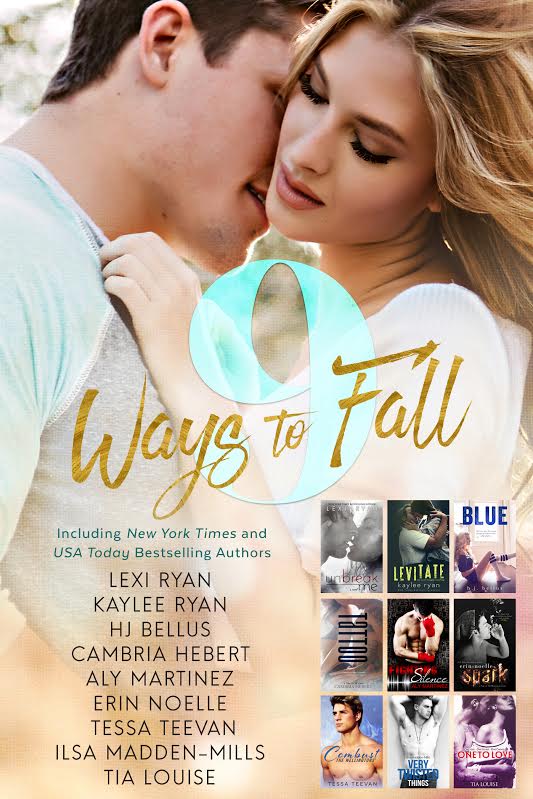 Blurb
Head Back to School with NINE COMPLETE (Full-Length) Romances from New York Times, USA Today, and Bestselling authors NEVER BEFORE in ONE Boxed Set!!!
NINE new book boyfriends are all here to make you sigh, swoon, and switch panties as you head back to school (or kiss the kids and send them out the door! *wink*)
INCLUDING:
UNBREAK ME, by Lexi Ryan: Returning home to be a bridesmaid in her ex-fiancé's wedding to her sister, Maggie Thompson, a 21-year old college-dropout, hopes to salvage her long-tarnished reputation and strained relationship with her family. Instead, she finds herself caught in a web of secrets and deception between the man who once promised to fix her and the sexy ex-rocker who gives her permission to break.
LEVITATE by Kaylee Ryan: Just when you think you've got it all figured out, you realize your puzzle is unfinished. With one touch you find a piece you never thought you needed. The piece that makes you Levitate.
BLUE by HJ Bellus: Blue Williams shines no matter the circumstance, until one night changes her forever. The beauty is gone, and all she has left are nasty, ugly memories. The man who saved her has a story of his own, with 90 percent of his body scarred. What happens when the Beauty falls for the Beast?
TATTOO by Cambria Hebert: An undercover cop on vacation, a bank teller just doing her job, and a group of bank robbers waiving a gun around. Just when Brody and Taylor think they'll make it out a tattoo changes everything.
FIGHTING SILENCE by Aly Martinez: I spent my life dodging the punches reality threw at me. I had worthless parents and two brothers who depended on me. Meeting the love of my life at age thirteen was never part of my plan--neither was gradually going deaf at the age of twenty-one. They both happened anyway.
SPARK by Erin Noelle: Desperate to improve his younger brother's worsening condition, Crew Elliott and his family decide to turn to unconventional treatments and move to Colorado. It is there, in the search for medical marijuana, he finds beautiful, free-spirited Hudson Shavell--a girl who may not only hold the key to heal his brother, but to fix him as well.
COMBUST by Tessa Teevan: When Virgin Queen Andi Kane meets Cohen Wellington, she's sure he's The One... She's never been more wrong. Three years later, he's the man she never wants to see again, she's the one who got away, and this time, despite her protests, he's not letting her go without a fight.
VERY TWISTED THINGS by Ilsa Madden-Mills: He's a rock star with a past. She's the heiress who's lost everything. Welcome to Briarcrest Academy--Hollywood style--where sometimes the best things in life are VERY TWISTED THINGS.
ONE TO LOVE by Tia Louise: Fighting, tattoos, fame, love, LOSS... It's the one thing Kenny and Slayde have in common, until the night Fate throws them together and everything changes. It's a story about fighting, about falling in love; and it's about losing everything only to find it again in the least likely place.