Title: Cocky Outlaw A Cocky Hero Club Novel Authors: Crystal Daniels & Sandy Alvarez Genre: Romantic Suspense Release Date: June 20, 2021 Vi Keeland and Penelope Ward are excited to bring you the Cocky Hero Club: original works from various authors inspired by Keeland and Ward's New York Times bestselling Cocky Bastard series. BL URB Sawyer Jackson, better known to his brothers as Big Easy, is dedicated to his club. Being the President of Hades Outlaw MC is a title he puts above all else. At the age of forty, Sawyer is the only member yet to settle down. As the bachelor of Hades Outlaw MC, he enjoys living life his way—no strings attached. Sawyer feels his life is better uncomplicated by love and intends to keep it that way. He has yet to meet a woman special enough to change his mind. Until a compassionate, alluring, green-eyed nurse steals his heart and changes his mind with just one look. From a young age, Elizabeth Hogue knew she would follow in her parent’s foots
Post a Comment
Read more

Title: Shameless Stranger A Cocky Hero Club Novel Author: Hollis Wynn Genre: Contemporary Romance Release Date: June 20, 2021 Vi Keeland and Penelope Ward are excited to bring you the Cocky Hero Club: original works from various authors inspired by Keeland and Ward's New York Times bestselling Cocky Bastard series. BL URB Most people have two lives - the one they actually live and the one they dream of. For me, it's before and after. I was living my dream, and loving every minute of it. It only took an instant for everything to come crashing down. Now, instead of being the center of attention, I try to hide in plain sight. Instead of champagne and parties, I have my coffee and my journal. And that's how I like it. Until Benton Riggs enters the picture. I’m immediately drawn to him and his secrets- the main one being his Jekyll & Hyde personalities. Mr. Push-and-Pull takes me on quiet romantic dates all over the city. Not only that, he owns half the places we
Post a Comment
Read more 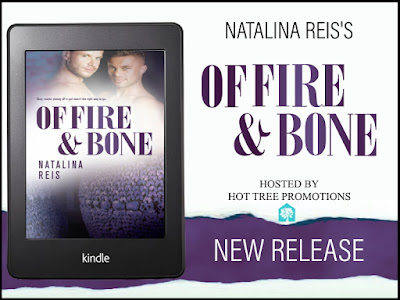 Author:   Natalina Reis Title: Of Fire & Bone Series: Of Magic & Scale, book 3 Genre: Gay Paranormal Romance Release Date: June 19, 2021 Publisher:   Hot Tree Publishing Cover Designer:   BookSmith Design NOW LIVE! Amazon US: https://amzn.to/3eUCwbx All links:  https://books2read.com/offireandbone As if having a powerful druid and a goddess for parents doesn't suck enough, throwing a vengeful god into the fray certainly doesn't do Aiden any favors.   Aiden Mercer's summer has been interesting—if by interesting you mean life-threatening and heartbreaking that is. With fall fast approaching, he’s looking for a quiet time in the arms of his boyfriend, Naël, the handsome merman. Alas, life never quite goes the way you plan it, does it? Unless Aiden finds a way to stop the wicked god Baburaj and his mother, Jhanvi from achieving their devilish goals, pain and destruction will hover over him like a starving vulture. In the third and final book in the Of Magic &
Post a Comment
Read more

Ava Harrison and Vanessa Fewings have  revealed the cover for The Ravishing! Releasing July 19, 2021 From USA Today bestsellers Ava Harrison and Vanessa Fewings comes the lush world of New Orleans filled with twists, turns, deceit and seduction. Anya:  My father was ruthless. Cold. Calculated. Formidable. Every decision. Every step. Every thought. Every breath he controlled. I never thought anyone could despise him as much as I did. I was wrong. So wrong. There was one person. He wanted revenge. I was the willing pawn. He was dangerous, beautiful, broken, and most of all a way to get back at my father. But there’s one thing I didn’t count on . . . Falling in love. Cassius:   Stephen Glassman is my sworn enemy. And so, I felt no guilt as I took his most valuable possession. His darling daughter. Anya’s suffering is my new favorite pastime. My promise to kill her one day? Inevitable. She’s mine now. Mine to control. Mine to seduce. Mine to own. Who knew revenge would be this sweet? Co
Post a Comment
Read more 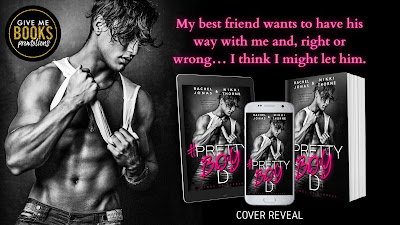 Title: Pretty Boy D Series: Kings of Cypress Pointe #1 Authors: Rachel Jonas & Nikki Thorne Genre: New Adult Romance Cover Design: Rachel Jonas Photo: Michelle Lancaster Release Date: July 9, 2021 BLURB Dane Golden—Best friend. Temptation in football cleats. Roommate? I’m screwed. His followers don’t call him Pretty Boy D for nothing. The guy is, literally, God’s gift to women. I should know. I’ve watched chicks throw themselves at him since puberty. Sharing his loft should be simple. Easy. But shortly after I settle in, we realize being "just friends" was so much easier when we weren’t sleeping under the same roof. Seven years of thinking we had this down to a science goes out the window the night Dane sees my “Never Have I Ever” list. Now, he’s on a mission to help me cross off the top four items. Some of which aren’t quite as innocent as he’d expect. What he’s proposing will break the rules we agreed to when I first came to stay here. He wants me to giv
Post a Comment
Read more

Title: Until Ireland A Happily Ever Alpha World  Novel Authors: TL Reeve & Michele Ryan Publisher: Boom Factory Publishing, LLC Genre: Contemporary Romance Cover Design: RBA Designs Photo: Mary Chronis Image: Period Images Models: Ben & Gezzi Release Date: June 25, 2021 BLURB The BOOM. The heart-pounding, inexplicable sensation of falling in love. An emotional pull that can complete a man in one second and destroy him in the next. Mack Redman doesn’t believe in the phenomenon, until he meets a caustic tongued, hot-blooded woman, named Ireland Banks. She can turn him inside out with a single look, leaving him aching for more. Bad days are par for the course when it comes to Ireland Banks. After finding out her ex-boyfriend had been fencing stolen cars, her world’s torn apart. Starting over in a new town isn’t easy, but Ireland doesn’t know the word quit. Now, as the co-owner of Banks Automotive, she prides herself on being above reproach. When she meets Mack Redman,
Post a Comment
Read more
More posts