Showing posts from February, 2017
Show all

Release Day Blitz - Bond of Love- Maryann Jordan   Author - Maryann Jordan Book - Bond of Love Event Date - 28th February Hosted by Hooked on books & Cherry0Blossoms Promotions Bond of Love (Letters From Home Series Book 3) When Letters From Home make all the difference. Ben Fowler, an Army mechanic on tour in Afghanistan, loved listening to his squad member read letters from his sister. Alicia Newton’s letters to her twin brother kept them as close as ever. When tragedy strikes, she relies on his friend, Ben, to fill the void. As Ben and Alicia help each other with shared grief, they grow closer. But as Ben’s job is still dangerous, Alicia wonders if she can risk her heart again. Can two broken hearts find healing in each other? A standalone, no cliffhanger, and an HEA. For language that some may consider crude and for scenes of a sexual nature, mature (18+) readers only. https://www.goodreads.com/book/show/33921476-bond-of-love
Post a Comment
Read more

Title: Dirty Wife Games Series: Indecent Games #2 Author: Clarissa Wild Genre: Dark Erotic Suspense Release Date: February 28, 2017 Blurb * This is a Standalone novel * A scorned wife on the run, and a stalker who follows her every move… Match made in heaven? After being forced to marry a tyrant, Hyun Song flees his home in a desperate attempt to save what’s left of her dignity … and her life. Now on her own, she tries her best to move on with her simple life. But she quickly realizes she can’t escape her past … and that she’s not alone … He watches her through her window. Sends her indecent notes. Stalks her everywhere she goes. He wants her badly, and when she finally lets him in … It’s time for the wife to play a dirty game. Author’s note: This story contains sensitive content that may be upsetting to some readers. ALL BOOKS CAN BE READ AS A STANDALONE. Indecent Games Series: Wicked Bride Games: Naomi’s Story. Dirty Wife Games
Post a Comment
Read more

IF YOU WERE MINE RELEASE

If You Were Mine, an all-new sexy and emotional standalone from USA Today Bestselling author Melanie Harlow is available now! If You Were Mine by Melanie Harlow Genre: Contemporary Romance Theo MacLeod wasn’t supposed to be the one. Tall, dark and handsome suits me just fine, but the cocky grin, know-it-all attitude, and mammoth ego? No thanks. I only hired him so I wouldn’t have to sit at the singles table again. It was just pretend. He wasn’t supposed to kiss me. My heart wasn’t supposed to pound. We weren’t supposed to spend the night together—the hottest night of my life. One night turns into a snowed-in weekend away, and even the blizzard of the century can’t cool the fire between us. I can’t get enough—of his smile, of his body, of the way he makes me feel. We’re nothing alike. He’s a daredevil, and I’m a nervous Nellie. He’s a drifter, and I want to put down roots. He’s an opportunist with a checkered past, and I’m a Girl Scout volunteer. But none
Post a Comment
Read more 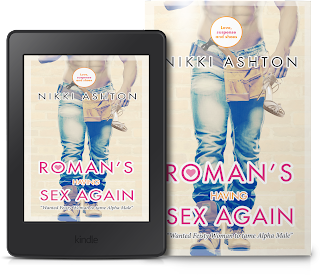 ☆.•°☆.•°*°•.☆ NEW RELEASE & GIVEAWAY ☆.•°*°•.☆°•.☆  Roman's Having Sex Again by Nikki Ashton is now LIVE!! Amazon - myBook.to/NARoman Synopsis Summer James has suffered a devastating change to her life, one that could shape her future and to make matters worse she now has a new boss. Not such a major problem, some would think, but that boss is Roman Hepburn. He's rude, grouchy and impatient and has a damn fine ass! Very quickly her feelings for the dark, brooding, Roman change and it soon becomes evident that some highly charged sexual tension has been bubbling under the surface, and Roman makes it clear that he intends to make Summer his. Will Roman succeed in getting the girl, and if he does will he succeed in keeping the girl? Or will circumstances and Roman's hilariously strange, but loveable family, send Summer tottering to the hills on her six inch heels? This is a sexy, fun romance with some laugh out loud moments. Full of quirky characters, broody men an
Post a Comment
Read more

worth any cost RELEASE BLITZ

Title: Worth Any Cost Series: Gaming the System #6 Author: Brenna Aubrey Genre: Contemporary Romance Release Date: February 28, 2017 Blurb You are cordially invited to the wedding of the decade. Adam Drake and Emilia Kimberly Strong have chosen a date to solidify their love in the bonds of matrimony. Join them on their exotic destination wedding. Visit with their friends and loved ones. But hold the champagne toast. Fate has a few last tests for our couple on their way to the altar. Natural 20 or natural disaster? ADD TO GOODREADS Purchase Links AMAZON US / UK / CA / AU B&N / KOBO / iBOOKS Excerpt Satisfied with my results, I settled on the bed, all snug and dry in my robe. Pressing a stack of clean washcloths to my mouth to muffle the laughter, I heard the water turn off. After a few seconds' hesitation, he called from inside the bathroom. "Hey. Where are all the towels?"
Post a Comment
Read more
More posts