Showing posts from March, 2018
Show all

ROMANCE BETWEEN THE PAGES PODCAST

Listen on Itunes (Subscribe so you never miss an episode! It’s FREE!) Ever wondered about the personalities behind your favorite books? Victoria Danann 's new podcast with Riley J. Ford has an incredible lineup of authors booked through the spring. No question is out of bounds. Check it out! THIS WEEK'S BEST SELLING AUTHOR... AVERY FLYNN! USA Today bestselling romance author Avery Flynn has three slightly-wild children, loves a hockey-addicted husband and is desperately hoping someone invents the coffee IV drip. She fell in love with romance while reading Johanna Lindsey’s Mallory books. It wasn’t long before Avery had read through all the romance offerings at her local library. Needing a romance fix, she turned to Harlequin’s four books a month home delivery service to ease the withdrawal symptoms. That worked for a short time, but it wasn’t long before the local book stores’ staffs knew her by name. Avery was a reader before she was a writer and
Post a Comment
Read more 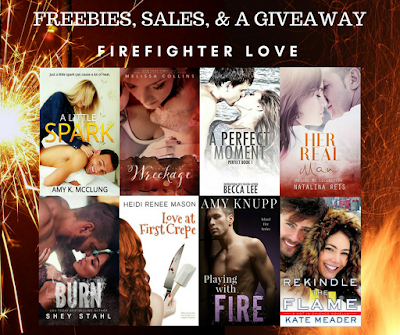 Title: A Little Spark Author: Amy K. McClung Publisher: Hot Tree Publishing Genre: Contemporary Romance Release Date: March 31, 2018 Blurb Sparks fly when sassy firefighter Jilli meets her match in Amy K. McClung’s enemies-to-lovers romance.   When Sam and Jillian meet, the snark and sparks start to fly. Despite their intense attraction, words and actions are misunderstood, and miscommunication is rife. Will their stubbornness be their downfall or the start of something extraordinary? ADD TO GOODREADS Purchase Links $1.99 (half price!) for a limited time AMAZON  US  /  UK  /  CA  /  AU B&N / KOBO / iBOOKS Author Bio Amy McClung was born in Nashville, TN. She is the second oldest of four girls and occasionally suffers from middle child syndrome. She met the love of her life online in August of 2004, on his birthday of all days, and married him in September 2005. Currently they have no human childre
1 comment
Read more

THE IRON ORCHIDS ARE LIVE!!!

THE IRON ORCHIDS ARE LIVE! Impact by Danielle Norman is available on Amazon NOW! US → http://amzn.to/2F8VXOr AU → http://amzn.to/2BWnlx2 CA → http://amzn.to/2oD0NcH UK → http://amzn.to/2oDs7ri KindleUnlimited members can read all of the Iron Orchids - including Impact - for #FREE!!! BLURB: They always say that two wrongs don’t make a right... Well, she was wrong for breaking into a house that didn’t belong to her; even if she and her daughter had nowhere else to go. And, I was wrong for watching her on the surveillance camera as she moved through the house and climbed into bed. So I offered her a job and a home. Her smile… Her curves… Wrong has never felt so right. Now, I want to make the biggest impact yet… I want to make her mine. Impact is volume 3 in the Iron Orchids Series but may be read and enjoyed as a standalone contemporary romance. About Danielle Danielle is a Harley riding romance writer. Most days she can be found in jeans, t-shirts,
Post a Comment
Read more Title: Forever Lucy Series: Lucy and Harris Novella #5 Author: Terri Anne Browning Genre: Contemporary Rock Star Romance Release Date: March 26, 2018 Blurb SAVE THE DATE Mr. & Mrs. Jesse Thornton and  Mr. & Mrs. Devlin Cutter  Request you save the date  for the wedding of Lucy Daniels Thornton  to Harris Cutter  March 26th Planning a wedding should have been easy, especially with Aunt Emmie and Harris’s stepmom, Natalie, to help. Those two could rule the world from their phones, so I thought letting them help plan our wedding would make everything effortless.  I was wrong.  I wanted a small and intimate ceremony, but they wanted it to be huge, something that would overshadow every other celebrity wedding that had come before it. Because I felt like I owed it to my mom, I agreed, but now things were spiraling out of control. Details like the cake, the first song at the reception, and even pi
Post a Comment
Read more

Title: Oscar Series: The Davenports #1 Author: SJ McCoy Genre: Contemporary Romance Release Date: March 27, 2018 Blurb Oscar Davenport always wins. Always. He doesn’t come second, and he sure as hell doesn’t lose. He’s founded and sold three tech companies, netting him almost a billion dollars. He ran a hedge fund worth hundreds of billions—until he got bored. His latest project, Six, a nightclub in LA is another winner. It’s both a successful business and a playground full of playmates. He’s never met an obstacle he couldn’t overcome or a woman he couldn’t have. Until now. Grace Evans is the kind of girl you’d find curled up with a good book on a Saturday night—at least, usually. This Saturday night is different. This Saturday night she’s gotten all done up, in a dress she can barely breathe in and heels she can barely walk in. She had to. She had to venture into the lair of the enemy. The enemy is Oscar Davenport, and his lair is his swanky nightcl
Post a Comment
Read more

Title: Devils & Rye Series: Top Shelf #4 Author: Alta Hensley Genre: Dark Romance Standalone Release Date: March 27, 2018 Blurb Forbidden fruit tastes the sweetest. It had been years since I had seen her. Years since I last saw those eyes with pure, raw innocence. So much time had passed since I lusted after what I knew I should resist. But she was so right. And I was so wrong. To claim her as mine was breaking the rules. Boundaries should not be broken. But temptation weakens my resolve. With the pull of my dark desires… I know that I can’t hide from my sinful thoughts—and actions—forever. *Devils & Rye is a dark billionaire romance. If you don’t like a splash of shock, a dash of taboo, and a heavy dose of sex, then don’t take a sip of this TOP SHELF cocktail. ADD TO GOODREADS Purchase Links $2.99 for release week only AMAZON US / UK / CA / AU Free in Kindle Unlimited Also Available
Post a Comment
Read more

Title: Roman Series: The Clutch Series: Book One Authors: Heidi McLaughlin and Amy Briggs  Genre: Vampire Romance Release Date: March 29, 2018   Everything about him tells her to stay away, yet she can’t seem to get the vampire out of her mind. For Roman, humans are the bane of his existence always having to follow their rules. In all his years, he’s never needed one, until now. For Fiona, vampires are off limits, evil members of society, until the one known as Roman crosses her path and shows her he’s no different than her. a Rafflecopter giveaway Heidi is a New York Times and USA Today Bestselling author. Originally from the Pacific Northwest, she now lives in picturesque Vermont, with her husband and two daughters. Also renting space in their home is an over-hyper Beagle/Jack Russell, Buttercup and a Highland West/Mini Schnauzer, JiLL and her brother, Racicot. When she's isn
Post a Comment
Read more
More posts