Showing posts from August, 2018
Show all

Book: Cam Series: Wounded Heroes #2 (Can be read as a standalone) Author: Ava Manello Genre: Romantic Suspense Cover Design: Francessca’s PR & Design Hosted By: Francessca’s PR & Design Synopsis Fate's been cruel to Sarah Kennedy. Not once, but twice, her future has been altered by the turn of a card. Believing she's been abandoned by everyone she cares for, and barely holding on to her sanity, she finds herself caught up in a battle of wills between two men. Luckily for her one of them is Cam. He vows to keep her safe from harm. Little do they know how hard that promise will be to keep. With no hope of escape Cam calls on Declan and his fellow Wounded Heroes for assistance. What follows is a crazy, violent adventure that could cost them all their lives. But then, these are the Wounded Heroes, and they’ve never shied away from a conflict before. Add To Goodreads Purchase Links Amazon All Other Channels Prologue The room is dimly lit, and I'm almost choking on t
Post a Comment
Read more 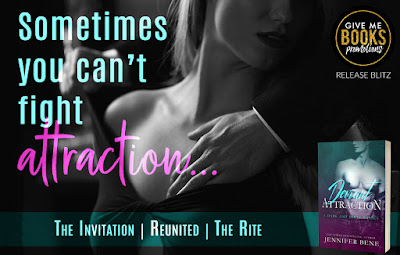 Title: Deviant Attraction A Dark and Dirty Collection Author: Jennifer Bene Genre: Dark Romance Release Date: August 14, 2018 Blurb Sometimes you can't fight attraction. No matter how deviant it may be. In this naughty collection everyone has their deviant desires, secret fantasies, and wicked attractions that tempt them into the unknown. Whether it's a private party where a good girl gets the chance to bring her dark side out to play, or a high school reunion where a second chance at the love of her life gets even better when his best friend wants to play too — 'The Invitation' and 'Reunited' will give you all the kinky menage romance you can handle! And if you're feeling extra naughty, the twisted novella 'The Rite' brings together danger, dark lust, and a magical HEA to take you through the darkness and into the bright light of love. USA Today  bestselling author Jennifer Bene brings all three of her hot, de
Post a Comment
Read more

Title: Hard Trigger Author: S.L. Hannah Publisher: AOH Publishing Genre: Romantic Suspense   Release Date: August 28, 2018 Blurb “Your mother’s opiates are coming from Jose Herrera’s distribution network.” My pulse races as my stepfather speaks these words. Because taking on the Herreras also means taking on Diego. Reckless, and hardened by a volatile past, Victoria does not see a future with Diego Herrera as a realistic option. As their childhood friendship ignites, they find themselves on opposite sides of a bloody feud between the two most powerful families in Mexico City. And she’s a Moreno now—brought up to be the secret weapon nobody suspected. But Victoria can’t deny the attraction. Diego’s commanding muscles, the coarse, dark hair of his solid chest, that rugged scar above his sensuous lips… Loyalty is in the eye of the beholder. ADD TO GOODREADS Purchase Links AMAZON US / UK / CA / AU B&N / KOBO
Post a Comment
Read more 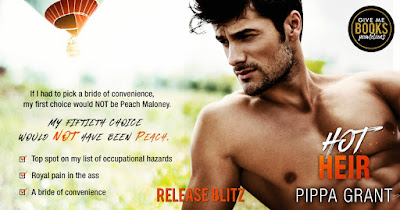 Title: Hot Heir Author: Pippa Grant Genre: Sexy Romantic Comedy   Release Date: August 31, 2018 Blurb If I had to pick a bride of convenience, my first choice would NOT be Peach Maloney. My fiftieth choice would NOT be Peach. Top spot on my list of occupational hazards? Yes.  Royal pain in the ass?  Yes. A bride of convenience? No. But I’ve unexpectedly gone from royal bodyguard to monarch, having inherited a crown that was stolen from my family long before my birth. The kicker of this unexpected royal gift? In order to take the throne I must find a wife. Have I mentioned Peach would NOT have been my hundredth choice? But I’ve no other options, and she needs a favor that my new position can fulfill quite nicely. So we’ve agreed to play the doting newlyweds out in public. In private, though, our rules are simple: No touching. No talking. And certainly no sex. I should have known better than to marry a rule-breaking pain in the arse.
Post a Comment
Read more

Do You Take This Cowboy? Book Blitz

Title: Do You Take This Cowboy? Authors: Stephanie Berget, Melissa Keir, Lyssa Layne, Robin Deeter, Ann Anders, Paty Jager, & D'Ann Lindun Genre: Contemporary Western Romance Release Date: June 2, 2018 Blurb For Better… For Worse… In Sickness and health… Falling for a cowboy is easy, but when weddings happen on the ranch, anything can happen and often does! Roping, Fireworks and Magic…Enjoy seven wonderful tales of love and marriage by some best-selling and award-winning Western Contemporary Romance authors. Stephanie Berget - Winning A Cowgirl's Love Money might not buy happiness, but what if it leads to love? Randi Bachmann has two problems after winning an extravagant wedding package from the reality show Your Dream Wedding: She doesn’t have a groom, and she doesn’t want to get married. In desperate need of the $50,000 prize money awarded after 6 months of wedded bliss, she picks the one man she knows will be happy to leave as so
1 comment
Read more

RISE FROM THE EMBERS Release

🔥 🔥 🔥     The King has fallen! While Stavros moves to take over Lars’s throne, the war for the entire kingdom begins. However, this is no ordinary war against Seelie or Unseelie. The real enemy is the most powerful object in the world. The Stone of Fail. Lars isn’t the only one the stone wants. Zoey Daniels is next on its list. And the stone will do whatever it takes to finally get the girl. With a battle on all sides and lives of those they love threatened fae, humans, Druids, pixies, and a certain sprite-monkey will have to come together to save the true King, along with the world, from destruction. Out of ashes, true heroes Rise from the Embers . Don’t miss the FINAL installment of the Dark/Light/Collector Series, where your favorite characters unite to try and protect those they love, and the earth from the ultimate opponent. Ember, Zoey, Kennedy, and Fionna lead the fight, but be prepared… Not everyone will make it out alive. 🔥 🔥
Post a Comment
Read more
More posts