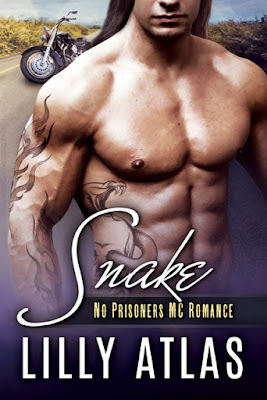 At the height of power, one ruthless misstep crumbles Snake’s kingdom in an instant. Beaten within inches of his life, betrayed by his own club, and left for dead, he has nothing remaining to focus on but healing and revenge.


Physical Therapist, Amanda, thinks she’s seen it all. Then, she meets Nick, a broken man who has sustained the most severe beating she’s ever encountered. Surly, brooding, and angry, he should be a nightmare patient. But under the rough exterior lies a man determined to overcome his devastating injuries, a quality Amanda can’t help but be drawn to. Plus, he’s ridiculously attractive, to the point she finds she can’t stay away.


Women like Amanda—kind, sweet, intelligent, independent, respectable—don’t exist in Snake’s world. When she offers him a place to live after his hospital stay, he can’t turn her down. The more time they spend together, the more torn he becomes between two realities: a gruesome MC world full of lies, betrayal, and hatred, or a life with Amanda that promises healing and peace.


As Snake helps Amanda through some troubling times, passion flares. For once, he actually cares about a woman and it’s enough to make him question everything. After leading a life as a dedicated outlaw, is it too late to change? And if not, is he willing to leave his vendetta behind?

Blackness surrounded Snake like a shroud.
“He still alive?” A shrill, pissed-off voice cut through Snake’s hazy confusion, making him jump.
He tried to open his eyes, but they might as well have been glued shut.
“Think so. The bastard makes a wheezy, gurgling noise every so often. I’m surprised he lasted the whole trip. That big man worked him over good. His face is unrecognizable. Look how swollen his fucking eyes are,” a second man said, his voice as well known as the first, yet not identifiable.
“That big man who kicked his trash was Jester. Ol’ man of the bitch we kidnapped,” the first man said. The high-pitched, almost whiny quality of his voice seemed so familiar, but just on the edge of recognition. In fact, both voices seemed to hover on the outskirts of Snake’s reality. Like they were coming from a television. Present, but not real. And still, nothing but darkness.
Pain, however, was there in real time. That was for damn sure. But even the hurt was difficult to place. It seemed to come from every pore in his body. But that wasn’t possible, was it?
“What’s the plan here, boss?” A third man spoke up.
Maybe he should say something. Ask for help. Snake moved his mouth to speak, but only a garbled mess of unintelligible sounds came out.
And then the pain localized.
Holy shit, his face throbbed like it had been pounded repeatedly with a sledgehammer. Inside his mouth, his tongue occupied the entire cavity like a balloon, making speaking near impossible. He dragged in a breath, but the air met resistance before it ever reached his lungs, blocked by a throat that felt swollen shut. Choking coughs racked him, jacking the pain to an unbearable level.
Snake registered the laundry list of things happening with his body and recognized that he should probably be in panic mode. Everything was fuzzy and he couldn’t get himself together enough to make sense of his reality.
“Pull him out of the van and toss him down the ravine. I’ll fire a couple slugs in him. See how overgrown it is down there? He’ll rot out here long before anyone ever finds the body.”
God, that voice…it was dancing on the edges of Snake’s diminishing consciousness. So memorable…
“You got it, boss.”
Rough hands grabbed under his shoulders and around his legs, jerking him forward. In the next second, he was airborne. The weightless flight couldn’t have lasted more than five seconds, before a crushing jolt and the insane sensation of the world spinning out of control ensued. His stomach lurched as he rolled and rolled. Jagged rocks and branches tore at his clothes and skin, bringing even more pain. His battered face mashed into the ground with each revolution until dirt and bits of rock clung to his skin.
All the while he struggled to breathe, inhaling soil and choking until it felt like his insides were being shredded. He waited for it all to stop, for death to take him and end the torture. Death had to be close, lurking just past the next rotation.
After what seemed like an eternity, Snake’s broken body slammed against something hard and the tumbling stopped. His head was still spinning out of control, but at least he wasn’t actually moving anymore.
Laughter rang out from a distance. “Shit, brother. Look how he rolled down that ditch like a fuckin’ sack of potatoes. You probably don’t need to waste any bullets, boss. No way he survived that trip. It’s what, twenty feet? And with all those rocks and branches. Something musta smashed in his fuckin’ skull.”
“Yeah, well, Snake’s a slimy bastard. I want to be one hundred percent sure. Can’t have him slithering back into our lives six months down the road,” the higher-voiced man replied.
He tried to move, tried to lift a limb and open his eyes, but there was a disconnect between his body and his brain. None of his muscles obeyed commands and all he could do was lie there, a giant, vulnerable target.
A pinpointed, hot, burning pain bloomed in his thigh, followed by another in his shoulder. Bullets. Hadn’t they said they planned to shoot him?
Odd.
He’d been shot before and it had hurt like a sonofabitch, a lot more than it did now. His brain must be pretty fucked up not to be registering the pain of two bullets. Of course, the rest of his body was one giant ball of agony. Maybe there was a limit to how much pain the flesh could experience. Maybe after the body hit the pain ceiling, it no longer registered something new.
Snake thought he’d known pain before, but it was nothing compared to this full body tormenting sensation. A man didn’t live his kind of life without pain.
His kind of life…
That high-pitched voice…
Recollection was right there. If he could just reach out and grab the fuzzy memories.
“Nice fucking knowing you, Pres.”
The words were called out about three seconds before a final hot flash of pain entered his side. Gut shot. The fatal blow.
Pres…
That high-pitched voice…
As the darkness behind his closed eyes grew even blacker, realization dawned.
President.
Grimm Brothers Motorcycle Club. Sandy Springs, Arizona.
The high-pitched voice. His long time right-hand man. Close and trusted friend. Brother.
Reality faded into the distance, taking some of the pain with it. Would there be peace in death? Not for him. Not going out this way. There were men who had to pay whether now or in the afterlife.
Men like Casper.
His loyal vice president.
A murderous traitor. 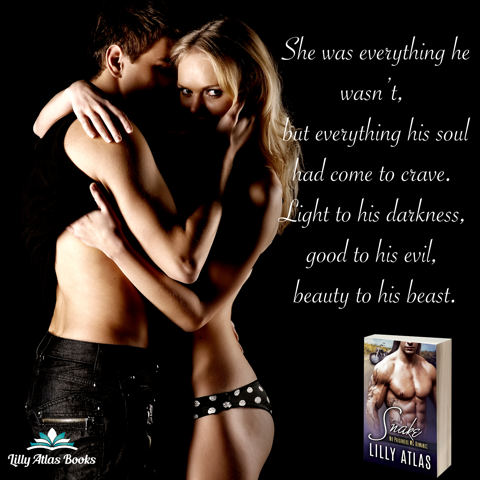 Review:
Snake will make you rethink all other MC's you have read. Snake wakes to find out he's been servery beaten and left for dead, when his memory comes back rage will consume him because betrayal is one thing you don't do in the MC. For Snake he is now rethinking his entire life. When he meets nurse Amanda things change as they fight their attraction. Amanda is there to do her job and she is trying her hardest to stay true to herself. These two travel through drama, betrayal, past, and love and lust. But who will come out on the other side? Will Snake get his revenge?

Lilly Atlas is a contemporary romance author, proud Navy wife, and mother of two spunky girls. By day she works as a physical therapist for a hospital in Virginia. Lilly is an avid romance reader, and expects her Kindle to beg for mercy every time she downloads a new eBook. Thankfully, it hasn’t happened yet, and she can often be found absorbed in a good book.