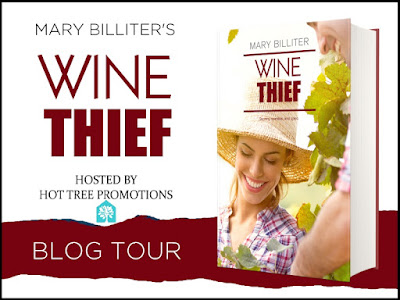 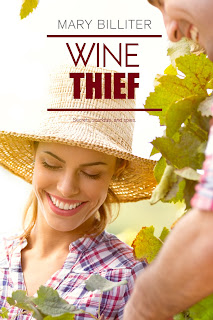 What happens when a corporate spy clashes with a woman he can’t help but fall for? In Mary Billiter’s witty novel of deception and heat, a red-hot suit and a beautiful academic are linked by a vineyard and the mystery surrounding its origins.

Chloe Dorsey places her belongings in storage, puts Southern California in her rearview mirror, and heads to her sister’s home in Northern California for a fresh start. As one of the newly hired wine educators at the Napa Valley Point Resort and Winery, Chloe’s knowledge of wine is as limited as her income.

Anthony “Tony” Mahoney has one objective—to locate the Mother Vine, the source of the rare and award-winning wine that can only be found at the Napa Valley Point Resort and Winery. His talent for stealing secrets is tested when he makes an unlikely alliance with the one woman who could destroy all his plans.

Can Chloe stop the wine thief, or will she have her heart crushed in the process? 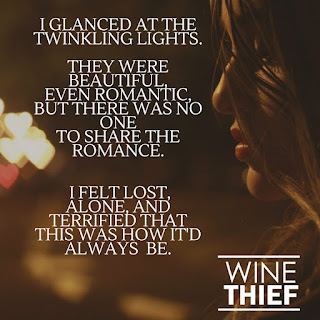 Nice wheels. The only thing hotter than the Mercedes SLK roadster that pulled into the lot was the driver. Something about a woman handling a fast car revved my engine. It was lame, but with her bright green scarf blowing in the wind, and dark Ray Bans covering half her face, she carefully navigated around the potholes in the parking lot like a pro. Then I noticed the dealer plates on the back of her car. Her careful maneuvering wasn’t an attention grab, but a move toward preventing a trip to the car wash. Smart. When she parked as far away from the crowd gathered by the train as possible, I’d bet money it was from a lack of experience parking the new ride. Her car was flashy, but something told me she wasn’t. But what did I know? Probably wishful thinking.
“Fifty bucks says she checks herself in the rearview before she exits.” Ty stood beside me. We were already into our first glass of wine, and about to claim the caboose.
“I’m in on that action.” Dan shouldered his way past us to stand on the top step. Taller and leaner than both of us, Dan didn’t need the extra leverage, but his years playing basketball made him position himself wherever he went. We all played ball together in high school and college, but Dan was the only one who had recruiters scout him out. He’d opted for an education over a basketball career, which I never understood. But that was Dan. A locked door prevented him from entering the tail end of the train and the ultimate center post.
“What about you?” Ty elbowed me. As our former point guard, he hadn’t outgrown his misuse of swinging elbows and causing personal fouls.
I shook my head. “No, my money says she won’t.”
Dan gripped my shoulder hard, like he was palming a basketball. “Oh, sweet Tony, always wanting to see the best. Look at her. Mercedes. Scarf. Big glasses. She reeks of conceit and money.”
“We’re in Napa, about to board a semiprivate wine train for your four-hour bachelor party,” I said. “It’d be hard to find someone in this crowd who doesn’t reek of money.” I paused and looked at the woman in question. The scarf, while loud in color, didn’t scream of conceit, but rather class. “It gets windy in a convertible,” I said absently.
“I think Tony likes her,” Dan said.
I shrugged him off me.
The woman we were stalking, I hoped from an appropriate distance, reached behind her head and untied her scarf. I hated to admit it, but I felt a bit of an adrenaline spike waiting for the reveal. With the green scarf, I think I was expecting a ginger, but instead smooth black hair that hit her chin shone in the sunlight.
“Short hair?” Ty said. “Why would she need a scarf?”
Dan laughed. “That girl has a hell of a lot more hair than me.” His black hair was thinning, and we knew it’d soon be gone like his father’s. But until then, Dan spiked it forward. He stood with a shit-eating grin on his face that made me shake my head.


When a tall blonde sipping a glass of red glanced over at us, I politely smiled in her direction. I shot my two moronic friends a stern warning glare, but that didn’t stop either of them from laughing. And despite myself, I grinned, but added, “Nothing wrong with short hair. And from where I’m standing she wears it well.”

More From This Author

Mary Billiter is a weekly newspaper columnist and fiction author. She also has novels published under the pen name, “Pumpkin Spice.”

Mary resides in the Cowboy State with her unabashedly bald husband, her four amazing children, two fantastic step-kids, and their runaway dog. She does her best writing (in her head) on her daily runs in wild, romantic, beautiful Wyoming.