Detective Kali Mann lives by her nickname: The Mann-Eater. She’s a true love them and leave them with no attachments—ever. She’s hard-core, to the point, intense and she doesn’t always play nice with others. When her partner, Keith Harvard, finally gets her to take notice of him, the case they are working goes awry, and suddenly Kali is having emotions she’s not sure she wants. A major part of her past will come back to haunt her and just as she beings to open herself up, her life will be torn apart.

Love Torn is the second book in the Twisted Love Series. The first book, Love Lorn, was written by Amy Manemann. If you haven't read it, nows the time to so that you have the backstory on Detective Evie Harper when they two characters are partnered together in Love Inked. 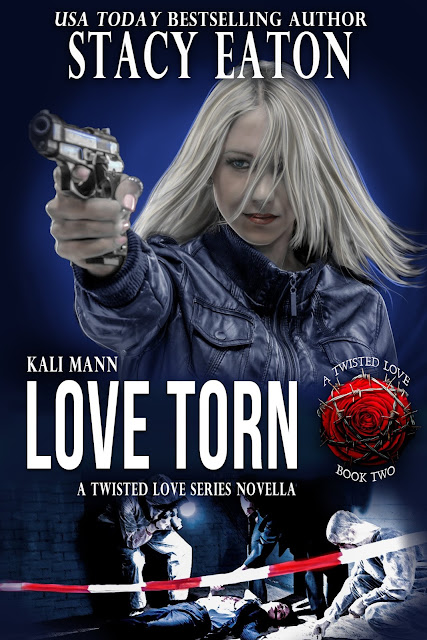 I smiled into Westing’s blue eyes. There was no doubt I cared about the handsome guy, but we were just friends—friends with benefits when we were in a lull between other relationships. Well, he did relationships. I just had sex. I wasn’t interested in happily-ever-after. I’d seen what that fairy tale did to people, and it wasn’t a Disney song and dance with fireworks bursting over their heads as their lips first touched.

Love was brutal—useless. It clawed out your heart and voided your soul. It burrowed deep into your psyche and turned you into someone you weren’t; it forced you to do things you never would have done under normal circumstances. It tore you apart, fiber by fiber, until you were nothing but a shell of yourself.

Besides, the divorce rate between cops was off the charts, right up there with suicide rates for our profession. Who needed that shit?

If I wanted to get off—and I did often—I had a list of guys I could reach out and touch. The contacts on my phone were packed with digits to dial for a good time, but I never got serious with any of them. In fact, Josh was the only guy with whom I’d ever had seconds—and thirds—and more. Maybe it was because we never discussed it. We knew what the other one liked; we jumped in, got off, and then kissed the other goodbye as we walked away with a smile and a wave.

That was the kind of relationship that I liked: love them and leave them and not feel guilty about it—no heartstrings, no hopes.

Westing winked at me. “Alright, Mann, it’s your round.”

“Got it.” I went to scoot off my stool and put my hand down to the side to steady myself. Instead of landing on the side of my seat as I’d anticipated, my palm landed on Harvard’s thick, slack-clad thigh which rested against my stool. Instantly, the muscle under my hand bunched, and I found myself taking my time climbing out of my seat. As I got to my feet, my hand leisurely slid over the slick material of his slacks.

I peered his way before I turned for the bar and his heavy, dark lashes blinked slowly over his eyes, a knowing smirk lifting the corners of his full lips. Yeah, Keith Harvard and I were partners, and for the last six months, we’d kept it on the straight and narrow. Recently, things had changed, though. I was starting to seriously wonder how much longer we’d be able to keep it strictly professional. I was torn on this, as I really enjoyed working with him and dreaded the day I’d have to put in for a partner transfer.

Two weeks ago, Keith and I had slipped around the side of a row home on a warrant execution, heading toward the small backyard. We had committed to our forward direction and were about three feet from the corner we’d just come around when we had come under fire. Keith had bum-rushed me behind a small stone wall that normally housed trash cans. The two of us had just enough space to safely hide on our knees as long as I hugged the stone up close and personal, and he did the same to me. I tried not to think about how filthy the area was as my skin made contact with it.

Maybe it was the adrenaline that had us jonesing for action, or possibly it had just been a while since Keith had gotten off. Either way, as he kneeled behind me, our bodies were crushed together, my chest flattened against the stone, my cheek pressing against the cool, foul-smelling smooth surface as his hot breath rushed along the side of my face. His muscular chest was compressed against my back hard enough that I knew no light could be seen between our bodies. I could feel his heart beating fast and strong against my left shoulder blade. One of his legs nestled between mine, his thick thigh wedged snugly against my ass, pushing my hips roughly against the stone. After a moment, I realized that the other hard thing against my ass wasn’t a bone but a boner. Well—damn.

Determined to prove she’s more than just a pretty face, Detective Evie Harper works hard and trains even harder to be the very best. Her first homicide case will put her skills to the test as she and her partner, Detective Stephen Harris, track a ruthless serial killer terrorizing the west end of town. The Lovelorn killer may be one step ahead of them, but they’re closing in fast — until an immoral decision is made that leaves their partnership hanging in the balance.

Love Lorn, is the first book in a six-book series called The Twisted Love Series. While this book was written by me, Amy Manemann, the second book, Love Torn, will be written USA Bestselling Author, Stacy Eaton. The two of us have worked together on these two books so our stories run parallel and prepare you for the first full-length novel in the series coming this fall.

The first full length co-authored novel, Love Inked, will introduce author Amy Manemann’s Detective Evie Harper with author Stacy Eaton’s Kali Mann as they become partners. Their lives are about to change, and the cases they will investigate will be intense. Between a new serial murder and dealing with their pasts, these two will be tearing up the streets and the pages as they deal with Twisted Love.

Love Inked is slated to release in later Summer/early Fall.

Stacy Eaton is a USA Today Best Selling author and began her writing career in October of 2010. Stacy took an early retirement from law enforcement after over fifteen years of service in 2016, with her last three years in investigations and crime scene investigation to write full time.

Stacy resides in southeastern Pennsylvania with her husband, who works in law enforcement, and her teen daughter who is working toward her second degree black belt in Tae Kwon Do and on the choral and cheerleading squads at school. She also has a son who is currently serving in the United States Navy.

Be sure to visit her website for updates and more information on her books.

Sign up for all the latest information on Stacy’s Newsletter!