What the Heart Wants Release 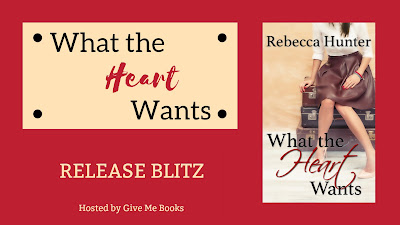 It was a chance to follow my heart.
With my camera and an around-the-world ticket,
I arrived in Stockholm with a plan
to satisfy my wanderlust
to build my dream career.

Then I met Niklas
my hot, moody neighbor
with questionable manners and a fresh gash
over his eye.

I thought I knew where I was going
when I left
my old life behind.

But what if my heart wants
two different things?

A version of this book was originally published as Stockholm Diaries, Caroline.


What the Heart Wants is that story told in first person. If you like your stories in third person, Stockholm Diaries, Caroline is still available, too!

What the Heart Wants is a full-length romance with a Happily For Now ending. The second book in this duet, The Map of My Heart, is the continuation of Niklas and Caroline’s (sexy!) journey.

“What are you doing out here?” he asked softly.
“Exactly what it looks like,” I said. I sounded a little more curt than I had intended, so I softened my voice. “I’m photographing the trees in the park. I just didn’t realize you were so…so near.”
My face heated up. His eyes bore into me as I said these last two words, and for a moment, his guarded look faltered. “I meant what are you doing out here, alone again at four in the morning?”
“It’s when the light is best,” I said with a twinge of irritation. Why was I explaining myself to this man? I put a hand on my hip and, with a hint of sass, added, “What are you doing out here?”
He ignored my question. “It’s not safe to be out here by yourself.”
I raised my eyebrows, bristling at his stark tone and the implication that he, practically a stranger, was the authority on what was best for me. And he was implying that I wasn’t safe out here when he himself was, in fact, out here alone as well. After all the talk about pro-gender-equity men in Sweden, how had I managed to find a neighbor who hadn’t gotten the message? I sighed.
“I have pepper spray,” I said, digging in my pocket until I pulled it out.
“Not sure that stuff is legal here in Sweden,” he said, raising an eyebrow. “Besides, you weren’t ready to use it.”
“I would have been if there was real danger.” I knew my answer sounded childish before the words even left my mouth, but I said it anyway.
Much to my increasing irritation, he gave a dry laugh.
“Fine,” he said. “Then spray me. Right now.”
I frowned. “You don’t want me to do that. It’ll burn your eyes. Badly.”
“That reasoning is why the pepper spray won’t help you,” he said, the amusement still on his face. “You have to be willing to use it.”
He was goading me, I could feel it, but it was working. My hand twitched around the canister.
“Fine,” I said and reached to pull the cap off the spray.
But before I even touched it, he grabbed both of my hands together with one of his. He used the other to turn me around and hold me against his solid chest. My pepper spray dropped to the ground. I gasped, my mind trying to process the sensation of my back against the warmth of his hard muscles. I stopped breathing. His large arm held me firmly against him, and my heart frantically pounded inside my chest. I looked down at the scarred knuckles of the hand that was easily holding both of mine.
Before my mind had fully registered all these details, his grip softened. Gently, he turned me back around by my waist so I was facing him, but he didn’t release me right away. I wasn’t sure where to look. At the broad, solid chest only inches away? At the tense muscles of his arms? I drew in my first, shaky breath in too long. I tilted my head up and found Niklas’s eyes fixed on mine.
“It’s not safe to wander around alone at night, even if it’s light out,” he said softly.

Rebecca Hunter is an award-winning author of sensual, emotional adventures of the heart. She is a reader, traveler, former English teacher, chocolate lover, and keeper of a very messy desk.

Over the years, Rebecca has called many places home, including Michigan, where she grew up, New York City, San Francisco, and, of course, Stockholm, Sweden. After their most recent move from Sweden back to the San Francisco Bay Area, she and her husband assured each other they'll never move again. Well, probably not.

The first book in Rebecca's indie series, Stockholm Diaries, Caroline, won the 2016 National Excellence in Romance Fiction Award in the Contemporary Series category, and she writes about hot, edgy bodyguards in Australia for the new, super-sexy Harlequin DARE line. To sign up for news, sneak peeks and free bonus stories, go to Rebecca's website at https://www.rebeccahunterwriter.com