ECHO OF A HERO Spirits of Power BLOG Tour 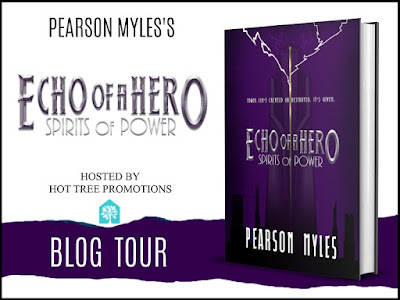 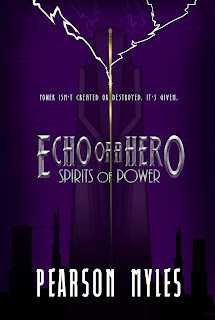 Two months after surviving an accident that should have killed him, Austin Bennet woke up with his bed on fire. That was only the beginning. As a foreboding scar spreads on his chest, Austin discovers that he has inhuman abilities. Soon hiding from the government’s enforcers, Austin finds himself swept away by The Orchid, a reckless insurgent who happens to also be one of the plenaries, a powerful race of beings with incredible powers and technology that were outlawed by society decades ago.

But is it really the plenaries humans should fear? When rumors surface about someone manipulating the world government, Austin’s new allies fear an old enemy of theirs has returned. Could Austin be the key to reunifying humans and plenaries? Or is he just a tool of destruction created for an even darker purpose?

Shaking his head, Austin was turning to leave when he suddenly flew out of his wheelchair from an explosion. Wind howled in his ears as the booming of thunder returned instantly with the crackling lightning. His ears rang and his vision blurred when he opened his good eye. For a moment, Austin thought a tornado had appeared as the trees next to him creaked and shook while the storm clouds spiraled down around the open area. As the ringing in his ears subsided, he heard an outcry from an indistinct voice mixed with the sounds of the storm. The sound was drowned out by another ear-popping blast. A burst of purple and yellow lights blinded Austin as he tried to shield himself from the danger.

After another outcry, everything around Austin went eerily quiet. He no longer felt the wind whipping around him, or the ground shaking from the freak storm. Peeking through his trembling hands, he couldn’t stop shaking as he glanced around. The storm had vanished completely. Crawling back up into his chair, he took a few raspy breaths to calm down. After steadying himself in the seat, he looked to his right and then to his left.

Austin cried out, blinded by yellow light when the force of energy collided with him, flipping him high into the air. Lightning pierced his body, tearing through every fiber. His blood boiled and burned under his skin, smoking in agony. As the strange power surged through him, his skin regrew and knitted itself back together. Austin’s body glowed with yellow energy as he crashed to the ground unconscious. 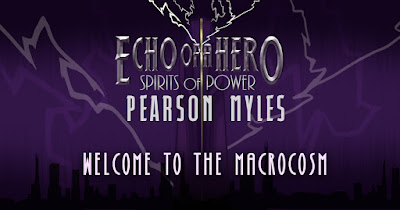 Pearson Myles has been writing stories since he was sixteen years old, drawing inspiration from his childhood adventures traveling across the United States with his family. He especially loves the slopes of Denver, Colorado, where he wrote his first draft of Spirits of Power. Pearson is a huge fan of books and has read The Hobbit and the Harry Potter series far too many times to count. When he isn’t reading or writing, Pearson is training as a martial artist in Tae Kwon Do. Echo of a Hero: Spirits of Power is his first novel.