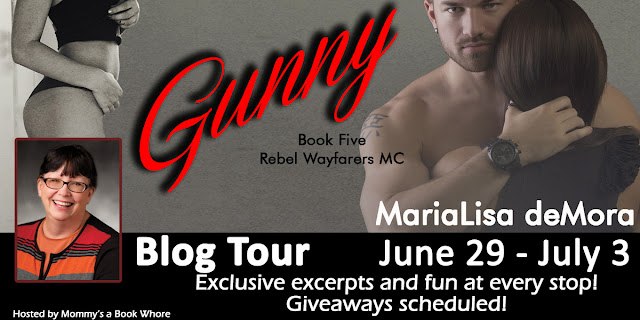 Shattered following a devastating betrayal that results in the death of his friends, Lane Robinson finds himself in Fort Wayne, Indiana, a world away from his previous life as a Marine. Robinson is trying to forget the past, but healing from the deadly deceit that cut blood deep is hard, and memories of that treachery taint every interaction in his life. He misses the comradery and bond he had with his brothers in arms, and now can’t help but view everyone around him with mistrust and suspicion.
Robinson meets a member of the Rebel Wayfarers motorcycle club, and with an introduction into the biker’s circle of friends, he finds that elusive sense of home that has been missing from his life for too long. Initiated into the club and now called Gunny, Robinson buries himself in his new life as a Rebel member.

Secure within his newfound family, Gunny fills his days with solitary work and finds he possesses a gift for motorcycle restoration, forming a career out of this exacting passion. Trying to leave behind the man he was before the club, unfortunately his feelings of cynicism aren’t so easy to set aside. Even within the club, surrounded by members he readily calls brother, he grants his trust to only a few. One of those is Davis Mason, national president, and a man he is proud to call friend.
Into this meticulously constructed life dances Sharon Elkins, the one woman who seems to possess the ability to tear down the walls he has spent so long building. She is the first person who sees beyond his surface façade, the first he’s let get close in so long…can he trust the emotions she stirs in his soul?

As she becomes an ever more important part of his world, darkness from their former lives collides in a dangerous cascade of conspiracy and schemes. Can he protect the woman he has come to love, and will they be able to fight their way clear of the chaos that threatens to entrap them?

Chapter 2, Brotherhood
She curled into a tight ball on the floor, trying not to shiver at the chill in the air. Cold for Florida, the temperature would dip below forty tonight, but she knew better than to close the bedroom window, open to capture the breeze off the orange groves as it threaded through the metal rods stretching across the opening. Her heart beat faster when the crunching of gravel came from outside, small pieces of rock grinding against each other, fracturing and fragmenting by minute amounts as they were placed under pressure. The deep rumble of a car’s engine abruptly shut off, leaving stillness in its wake.
Counting slowly, she measured time as she waited for him to come in from outside. In her mind, she imagined watching as he opened the driver’s door, mentally seeing him stand and stretch out his back before turning to pull a bag from the passenger’s seat. Rewarded with the quiet crumping concussion of the car door closing, she imagined him walking around the front of the vehicle, approaching the dark house.
When she came to the bedroom at precisely eight o’clock, there were no lights left burning behind her. That quiet clicking of switches plunging the house into darkness had stirred the fresh memory, striped into her back, of a howled, “You think I’m made of money?” She heard the clunk of the key in the lock, which opened only from outside, heard the knob twist and turn in the wood, the tongue of the solid latch scraping along the edge of the doorframe.
“Place?” he called the inquiry, and she immediately responded, letting him know she was where she was supposed to be; she was, as so often instructed, waiting. “Dinner?” That was the next question, and in a struggling voice, she indicated where his plate had been stored. She knew she had a fifty-fifty chance of picking wrong. Some nights, selecting the refrigerator over the warm stove was all it took to tip him to violence.
Violence, she thought with a silent laugh. Raised around the controlled violence of hockey, attending her brothers’ games, she remembered thinking at the time that slashing and tripping, hooking and boarding were the worst things in the world. They were the wickedest her teenage self could imagine. Now she knew differently, having learned the lesson time and again.
Slowly counting again, she waited for him to say something, anything to give her an idea of how the evening would go. Seventeen, eighteen, nineteen… Maybe tonight will be one of the sweet ones, she thought. Twenty-two, twenty-three, twenty-four… Maybe tonight he’ll ask, ‘Baby, why are you on the floor?’ Twenty-eight, twenty-nine, thirty… Or he’ll say, ‘I’m so sorry.’
Precisely at thirty-five, the crash of crockery sounded, and she recognized the sound of a plate dropping to the kitchen floor. Over the sounds of breaking dishes came his voice, barely audible to her ears, but wounding as if it were the lashing of the sound barrier, a clap of thunder, or the tearing sound of metal peeling back from a car’s frame. Not her name, not this time, no more than the hated single word uttered in a tone that caused a terror so visceral it manifested physically as all the hair on her body raised in a futile defense. Clasping her hands together at the back of her head, she tucked her bent elbows tightly against her temples, leaving her ears uncovered so she could hear her fate approaching. 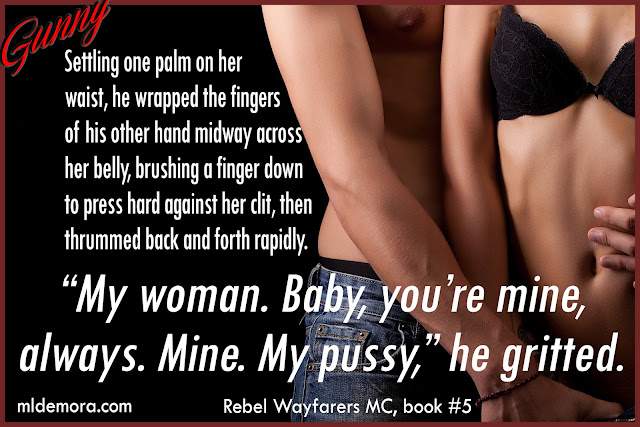 I love MC books there are one of my favorite series to read whether it be tied with erotica or regular romance. Gunny's story is no different and if you have read the books previously you already have a hint of who Gunny is. He has been through hell and back as a Marine, and is trying to pick up the pieces of his life. His MC is everything to him and he will do whatever it takes to protect it and the families. Shannon is the abuse wife who finally has the guts to leave and do what she wants but not without the fear of being found. Her connection to Gunny is strong, but can they both overcome their issues and be with each other? Or will their past get in the way?

Raised in the south, MariaLisa learned about the magic of books at an early age. Every summer, she would spend hours in the local library, devouring books of every genre. Self-described as a book-a-holic, she says “I’ve always loved to read, but then I discovered writing, and found I adored that, too. For reading … if nothing else is available, I’ve been known to read the back of the cereal box.” She still reads voraciously, and always has a few books going in paperback, hardback, on devices, on napkins! Oatmeal is her comfort food. She hates gardening but loves flowers; not cut arrangements, but in the wild, outside. She has a deep and abiding respect for our military. Her dad was career Air Force, and flew during the Cuban Missile Crisis, Korean Conflict and Vietnam War. Parades make her cry. Walking Dead is about the only TV she watches anymore, don’t bother her on Walking Dead night, when she’s been known to shout, “Go Team Darryl!” Yes, she’s still sad about Firefly.She’s a hockey fan, like … a serious hockey fan. She’s loyal to the Edmonton Oilers, but asks that we don’t judge her about that. She also likes the Nashville Predators and Ottawa Senators. The local ECHL team, the Fort Wayne Komets, are a fav of hers, and she has season tickets. She’ll also generally try to hit the road games within a hundred-mile radius.She’s a wanna-be hiker, working on a “bucket list” of hikes like Knobstone (completed in four days mid-April 2014 – whoooo!), sectioning parts of the AT (51 miles in Georgia in early-May 2014), and now and then looking west towards PCT.She embraces her inner geek; MariaLisa has been working in the tech field for a couple decades. A sometime PC gamer, she still plays EverQuest after all these years. She says, “What can I say, I’m loyal (see above, I’m an Oilers fan LOL). Yes, I’ve heard of WoW, and have a coupla toons there, too.”On music, she says, “I love music of nearly any kind—jazz, country, rock, alt rock, metal, classical, bluegrass, rap, gangstergrass, hip hop—you name the type, I probably listen to it. I can often be seen dancing through the house in the early mornings. But what I really, REALLY love is live music. My favorite way to experience live music is seeing bands in small, dive bars [read: small, intimate venues]. If said bar [venue] has a good selection of premium tequila, then that’s a definite plus!” 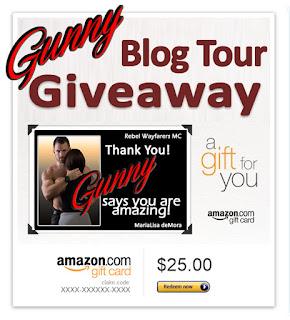