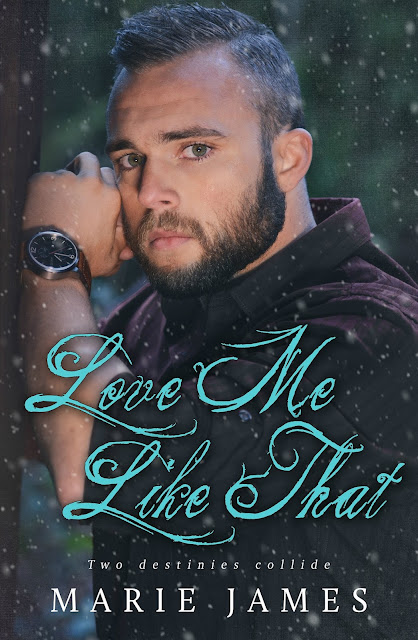 Two strangers trapped together in a blizzard.

One running from the past; one with no future.

London Sykes is on her own for the first time in her life after a sequence of betrayal and abuse. One man rescues her only to destroy her himself. An unfortunate accident lands her in a ditch only to be rescued by the most closed-off man she’s ever met, albeit undeniably handsome.

Kadin Cole is at the cabin in the woods for the very first and the very last time. Since his grief doesn’t allow for him to return home to a life he’s no longer able to live alone, he’s finally made what has been the hardest decision of his life. His plans change drastically when a beautiful woman in a little red car crashes into his life.

How can she trust another man?

How could he ever love again?

Will happenstance and ensuing sexual attraction be enough to heal two hearts enough that they can see in themselves what the other sees? 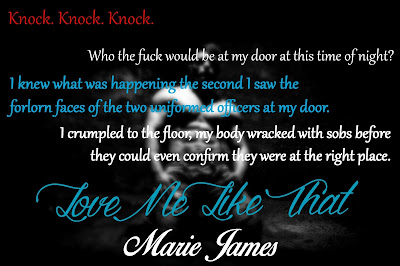 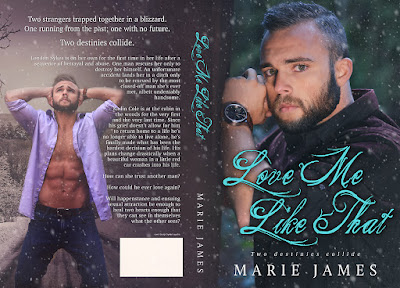 
Dinner was going great. We talked about future plans and vacations my parents want to take now that Dad is semi-retired. That all changed when dessert was being served, and Kegan got that look in his eye.

“So, KayKay? You told mom about the woman you have living with you yet?” Kegan says like it’s just another piece of everyday news to discuss at the table.

From the corner of my eye, I see both of my parents’ heads snap up and look at me. Center of attention, a position Kegan has always been better at than me. This is his payback for not spilling it about London when he asked. My mind is already thinking of things to do to get back at him; that’s if I don’t strangle him first.

I narrow my eyes at him before speaking. “I do have a house guest,” I respond with as much nonchalance as I can muster.

“She’s in the guest room,” I reply and look at my mother. My explanation does nothing to keep the happiness off of her face. Seems I’m as transparent to her as I am to Kegan, and she didn’t show up at the house like he did and see her braless in a tank top and yoga pants.

“And where do you sleep?” Kegan says just before popping an overly large bite of pie into his mouth.

My jaw clenches uncontrollably, and my left eye ticks periodically with my pulse. Fucker.

“How did you meet?” My Aunt Diana asks thinking she’s saving me from Kegan’s questions when she’s actually only making it worse.

Kegan drops his fork on his plate loudly and sits backs far in his chair. “Oh, I love this part of the story.” 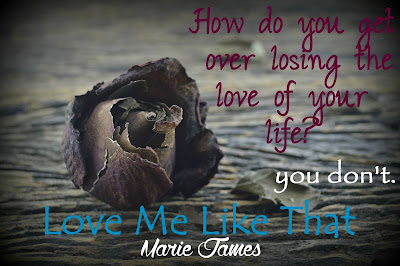 Marie James: I’m a full-time, working mother of two boys and wife of 11 years. I've spent almost my entire lifetime living in central Texas, with only short stays in South Carolina, Alabama, and Florida. I've always wanted to write novels and just recently had the gumption to sit down and start one. My passions include reading everything under the sun and plotting out new books to write in the future.

Love Me Like That is my 6th book. I’ve also written the Hale Series and a FanFiction named Psychosis, featuring up and coming cover model, Matthew Hosea, as the main character. This book was done for fun, and all of the proceeds are going to charity. All of my books are currently available on Amazon.

My current work-in-progress is titled Kincaid and is a spin-off motorcycle club novel from the Hale Series. Fans begged for Diego “Kincaid” 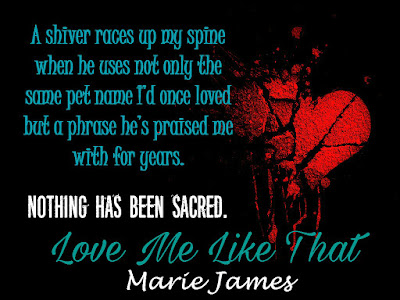