SOFTLY, AS I LEAVE YOU 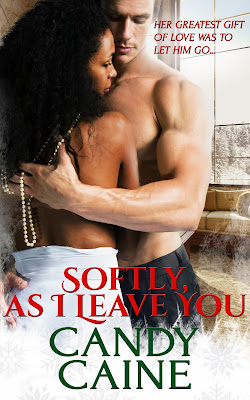 Ever since Alisha Houston runs into Daniel Mason on the ski slope it seems that they are destined to be together. At first, mad at the leggy, dusky- skinned skiing disaster, Daniel is sure he should keep a safe distance from her. But their paths keep crossing and he is puzzled how he can be so annoyed at a woman and still be so attracted to her. And she definitely turns him on.

Alisha is mortified that the one,  sexy man she is fascinated with at the ski resort is the one she sends to the hospital!  Then one shattering, unexpected kiss launches them into a love affair that brings red-hot passion and deep caring. Until Alisha’s estranged father dies, leaving behind a secret that devastates her.

Whether she’s writing a short story or novel, Candy Caine will make her interracial romances hot and spicy. Always striving to entertain her readers, Candy tries to breathe life into her characters, making life often interesting for her husband, Robert back in their home on Long Island, NY. And both are trying to teach their fifteen-year old yellow Lab, Sammy, new tricks.

Candy loves to hear from her readers. You can reach her at candy@candycaine.com.