COP ON HER Doorstep Now Live!! 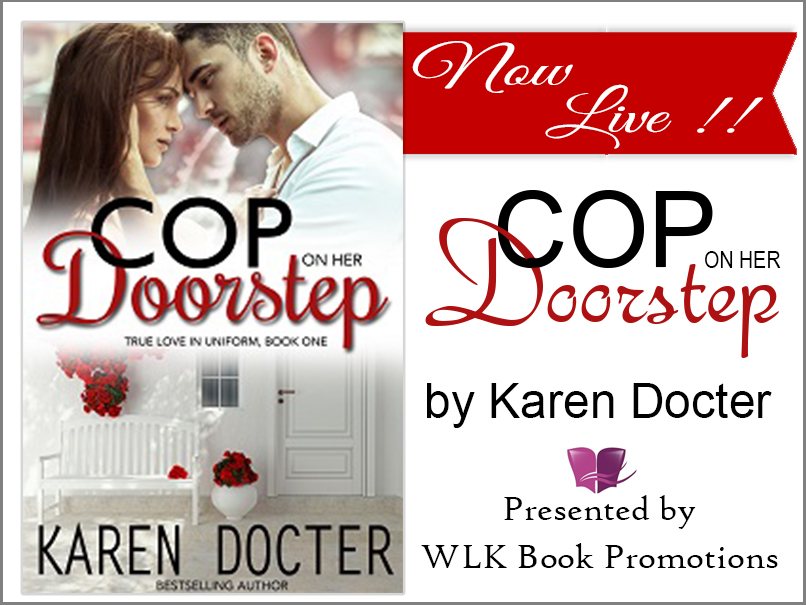 In the six years since her husband was killed by S.W.A.T., Carrie Padilla has spent long hours at work, rebuilding a life for herself and her son. The little time she has at home is spent keeping her eight-year-old son out of trouble, but he is all too eager to try to be the man in the house. When a handsome cop shows up on her doorstep, her errant son in tow, Carrie's heart stutters. The sexy Italian cop sets off all kinds of bells in her system, and she knows there's only one thing she can do to save what is left of her family, her husband’s memory, and her heart...avoid her new neighbor at all costs.
S.W.A.T. officer Jake Stefani already lost one little boy to gang violence, the dead boy’s older brother is missing, and Jake's not about to let the same thing happen to a neighbor's son. He drags the youngster home only to discover much more than a passing interest in the boy's beautiful, but wary, mother. Forced to take a leave of absence after a bust goes awry, Jake can think of nothing better to occupy his time than to keep Carrie and her son safe, and locate the missing teen who holds the key to taking the gang off the streets, once and for all.
But Jake doesn’t count on his stubborn, intriguing neighbor distracting him from his job, or the passion that flares between them. He doesn’t expect her amazing son to steal a piece of his heart. Jake is ready to risk everything for Carrie, body and soul. But it’s not all up to him. If their new love is to survive, Carrie will need to be strong enough to see the man's beating heart behind the badge, to look beyond the pain of her past, and decide that loving again is worth the risk.
(Stand Alone Novel)

“I found your son in my back yard.” He glanced at Eric. “He was engaged in a potentially harmful activity I thought you should know about.”
What in blazes is a potentially harmful activity? “What was he doing?”
“Preparing to vandalize my house.”
“What?” She stared at Eric. “Is this true?”
Her son’s eyes dimmed behind a flood of tears. His head bobbed up and down. His mouth opened, but no explanation came out. He simply fell apart. In seconds, her little boy was sobbing as if his heart would break.
Carrie scooted from her chair, rounded the coffee table, and knelt at his feet. She enfolded his trembling body in her arms and castigated herself for not registering how abnormally quiet that he’d been since he entered the house. He was in shock. The last thing he needed was her yelling at him.
“Shh, baby. It’s all right. We’ll work it out. It’s okay.” She pressed a gentle kiss against his temple. “Ah, honey, don’t cry.”
Jake couldn’t decide which bothered him the most, the stricken look on Carrie Padilla’s face or the hopeless sounds ripping from Eric’s narrow chest. He’d always been a sucker for distressed females and kids, and these two served as a double-shot.
He couldn’t shake the similarities between Mateo Reyes and Eric. Neither did it help that Eric’s mom was one of the sexiest women he’d ever met. His tastes normally ran to tall, sultry brunettes, but there was something about this petite woman's girl-next-door look that was firing his libido big-time.
Her eyes, a delectable shade of caramel with flecks of amber, drew him in deeper every time he looked at her. What her curvaceous body did to the sports tee and running shorts combo she wore should be outlawed. Clinging, damp material and flushed skin was a deadly combination. As if that weren’t enough, she had the most exquisite legs. The color of cream with a light splash of coffee. Smooth. Sexy. Nearly perfect.
His gaze dashed to her left ankle. The mole he’d noticed above her tennis shoe winked back at him, calling for his attention as a neon sign never could. It shouted, “Start here!” just like one of those connect-the-dot books he’d hoarded as a kid. He had a compulsive desire to follow the instruction, to nibble on that ankle and work slowly over the rest of her dewy skin to see if he could somehow develop a pattern.
Caught by the fantasy, his lips twitched. Who cared if there was a picture there? The seeking, all by itself, would make the trip worthwhile. In fact, his entire vacation might not be enough time to do justice to such an exploration.
Jake’s jaw clenched against the unreasonable cascade of desire. Was he nuts? This woman’s legs had nothing to do with his purpose here. And, if the impenetrable wall he’d watched form in her eyes a few minutes ago had meaning, he wouldn’t get a chance to go exploring in any case.