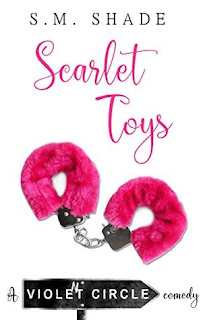 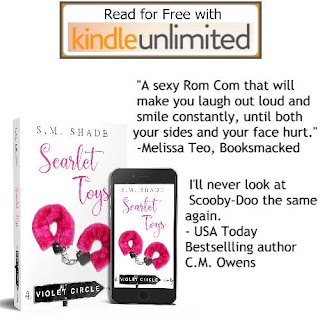 Living on Violet Circle, a place that’s less of a neighborhood and more of an insane asylum poured into the street, I thought I was prepared for anything. After you’ve seen a woman strip down at the laundry room to wash the clothes she’s wearing, then saunter across the street naked, you’ve seen it all, right?
How naïve I was.
After the factory closed, leaving me and a good portion of the town unemployed, I took a job managing Scarlet Toys. I knew it wouldn’t be a typical work environment, selling adult toys in a town more uptight than a constipated nun, but some things you just never see coming.
Like the protesters covered in poison ivy, screaming about smut peddlers.
Or a dancing dinosaur named Fappy.
Or the allure of the man standing in the center of all the chaos.
Wyatt Lawson, a six foot, four inch heap of muscle with a quick smile, ignited my interest in more than the available manager position. Like the missionary one. Or the rodeo. Maybe the side rider. What can I say? I’m an overachiever.
Let’s just hope he doesn’t scare too easily. 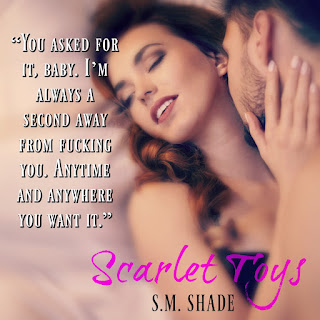 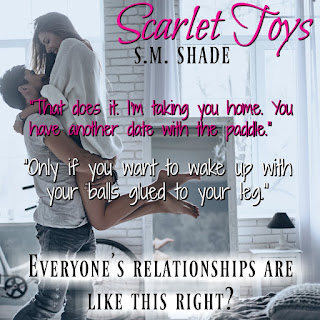 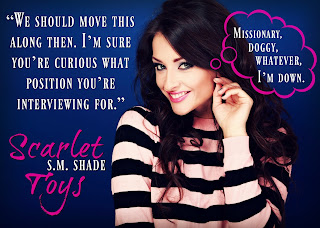 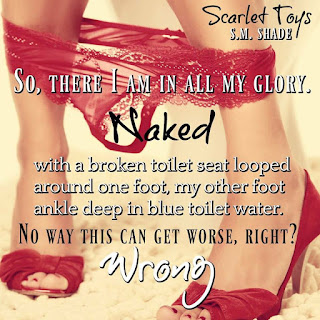 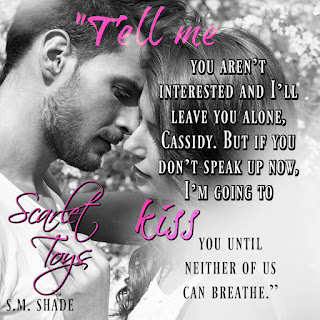 I can’t believe I’m sexting in a shoe store bathroom. A funny thought occurs to me. Since we’re going for a wax at the day spa next, I could do a little before and after picture. Jani was right when she said I’ve never sent nudes before. It’s time to live a little.

As quietly as possible, I put my shirt back on and slip off my panties, leaving my skirt on. Hmm…I’m not sure about the best way to do this.

I’m not going to squat down in here. I finally decide to put one foot on the toilet seat and then shove the camera under my skirt. The first picture is out of focus and with the light filtering through my green skirt, it looks more like a stepped on tennis ball than a vagina. Fine, the skirt has to come off too.

It joins my panties, hanging on the toilet paper dispenser. I’ve never felt so classy.

Naked from the waist down, I put my foot on the seat again, and focus on getting the perfect shot. The next one is pretty good and I send it, but I decide to take one more.

Why did I decide to take one more?

Just as I hit the button, the toilet seat slides to the side and the plastic bolts in the back holding it on both snap. The seat clatters to the floor, and my foot slides right into the toilet with a splash they probably heard on the sales floor. Thinking I’m going to fall, I panic and grab at the wall, dropping my phone, which slides out of the stall and toward the sinks.

So, there I am in all my glory. Naked, with a broken toilet seat looped around one foot while my other foot rests ankle deep in blue toilet water. No way this can get worse, right?

As I’m trying to extricate myself, I hear a small voice ask, “Mommy, what’s that?”

“The lady dropped her phone, Justin. Just put it on the sink for her.”

“But what is that? It’s weird and…hairy.”

Somebody please shoot me now. Where is a nice stroke or heart attack when you need one? Behind the door, a small boy is getting a look at his first vagina.

The toilet flushes and I hear his mother gasp when she takes the phone from him.

Yeah, I’m not coming out of here. Somebody is going to have to deliver my food because I’m never leaving this stall again.

“It’s just, um, a close up picture,” she stumbles, grasping for an explanation that isn’t some stranger’s vagina.

“Close up of what?” he insists.

“A…mouth. It’s just a blurry picture.” I hear the click of plastic against porcelain as she places the phone on the sink and says, “Wash your hands again.”

Justin isn’t finished asking questions though. Through the running water, I hear, “It had a moustache though. And four lips! Do some guys have extra lips? Am I gonna get more lips? Ohh! Is it an alien? Aliens can have extra lips.”

His voice fades as they leave, and I rush through the stall door to grab my phone, one shoe sloshing and leaving blue puddles across the floor. Of course, they had to have blue water. I pop off my shoe and stuff it with paper towels to mop up the bulk of the water.

That is how Jani and Emily find me a few seconds later.

HOLY OMG. Okay this is going to be short. GO READ THIS BOOK. It's funny, naughty, and full of yummy goodness. He opens a sex shop, she runs it, her friends are crazy, but he is crazy. Scarlet Toys will teach you have to live a little and laugh a lot. It's not without it's drama that is for sure, but you won't be disappointed. 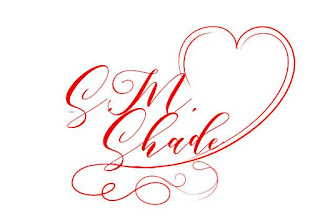 S.M. Shade is a homeschooling mom hopelessly addicted to Dr. Pepper, love stories, sunshine, and men with full sexy lips, though not necessarily in that order. A voracious reader since sounding out her first word, she started writing as a teenager and rediscovered her love of writing as an adult. Originally from Indianapolis, she now lives in a small Kentucky town with her teenage son.