TIL DEATH DO US PART Blog Tour 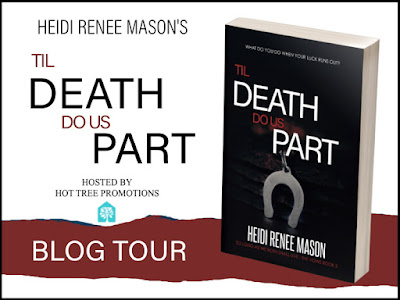 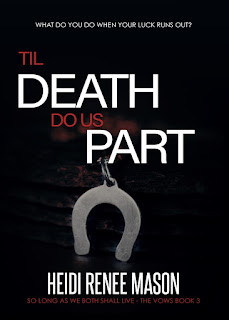 Targeted twice, Emma has done her best to move on with her life. Things are looking up, and the family is headed overseas to take part in a fairy-tale celebration. It doesn’t take long for Emma to realize that evil knows no boundaries. The past is running to catch up with her in a way that she could have never imagined. The darkness wants to overtake her, even across the ocean.

The final book in Heidi Renee Mason’s romantic suspense trilogy, The Vows. This is not a stand-alone romance.

She chanted over and over again that it was not happening to her. Told herself that none of it was real. Consoled her fragile mind with the assurance that she would wake up and find herself in her own bed, sleeping beside her husband.
Even as she said the words, she didn’t believe them.
Xavier pivoted Emma’s body, and she didn’t resist. She glanced up at his face. The distant look she’d seen in his eyes only a few minutes before was gone. At that moment, he was aware, and completely invested in what was happening. There was no question in Emma’s mind that Xavier knew exactly what he was doing to her.
Lust and greed snapped in his cold eyes, and the look on his face chilled her to the bone. She was completely at his mercy. Emma knew what was coming next, and there was nothing at all she could do to prevent it.
She clutched her bra tightly, but Xavier pried her fingers loose and snatched the garment from her trembling hands. Emma stood before him, completely naked and vulnerable.
“Please,” she sobbed, “I’m begging you, don’t do this to me. If you have any feelings at all, please take me home.”
It was her one last-ditch effort to appeal to any trace of his humanity.
Xavier’s locked eyes with her. “Home? My darling, Emma, you are home. Now let’s clean you up. Your hair reeks of vomit.”
He grabbed her arm and led her to the shower. Placing his hand under the stream, he checked the temperature before he forced her inside. Emma’s brain yelled for her to fight back, but she didn’t. There was no fire left. She’d escaped Xavier once already, and then she’d escaped Morgan. Both times she’d fought as hard as she could to get away.
This time, everything felt different. Nothing mattered. Xavier had won. Nothing she did would ever make him stop. She’d never be free of him. 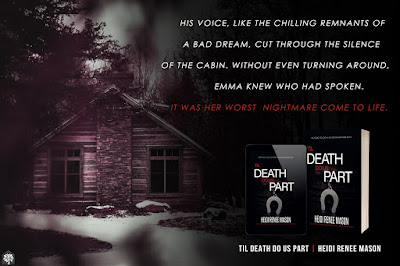 To Have and To Hold (bk 1)
Available now!

For Better or For Worse (bk 2)
Available now! 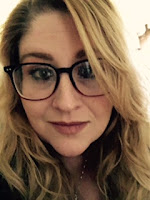 
Heidi Renee Mason is a passionate romance novelist and crafter of your next Happily Ever After. She loves listening to the voices in her head (from her characters, of course!) and creating worlds in which her readers can lose themselves for a little while. A native of the Midwest, Heidi now resides in the Pacific Northwest with her husband and three daughters.