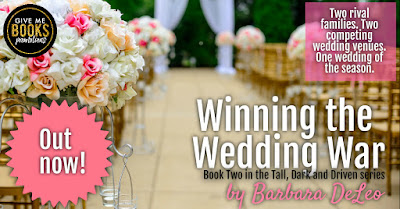 Nick Katsalos has a foolproof plan to save his parents' floundering wedding venue. The last thing he expects is for Erin Patterson, the captivating daughter of his parents' biggest rival, to waltz in and charm the client who could finally get the family business back on track. Nick would be furious--if only he could stop thinking about her.

When Erin and Nick enter into a wager to determine who will win the contract she prepares for the worst ... and is surprised by the glimpses of warmth she sees in the man behind the numbers. But Erin isn't about to forfeit what could be the biggest wedding of the decade to a man as cold as Nick. Especially since securing it means she could finally prove to her father she's just as capable of handling the family business as him.

But as the competition heats up, Erin and Nick must decide what's more important—winning or love.

“So, how was the movie?” he asked.
She frowned and looked at him sideways. “Which movie?”
“Pretty Woman. I know you’d have gone and watched it after I told you about all the mistakes.”
Her eyes narrowed. “As a matter of fact I did watch it again and you’re totally, one hundred percent wrong.”
He shrugged. “Am not.”
She put her hands on her hips defiantly and heat flared through him. “Vivian could totally have been eating so quickly that she went from a croissant to a pancake, to another pancake in the place of a few minutes while Edward was talking.”
He smiled to himself. He’d been right. She was competitive enough that she’d want to prove him wrong. “Why would she do that? Unless she wanted a pretty mean case of heartburn.”
“She’d never been in a hotel room like that, not eating breakfast, anyway.” She waved her hands in the air as if she were speaking about a real woman, a friend, someone who she’d talked to at length about this. “Maybe she hadn’t eaten for days. Maybe she’d never seen so much food on the table before and she wanted to eat as much as she could before they took it away.”
“Maybe she’d burned up so many calories when she slept with Edward that she was starving.” He couldn’t resist, and the blush it brought to her cheeks was worth it.
Her eyes flicked to his, then suddenly away, and in that second Nick had never wanted anyone or anything more in his life. He cleared his throat. Living in a wedding hall must have caused his logical brain to stall. He kick-started it just in time. “Or the continuity guy was sleeping on the job.”
She made a growling noise. “I’ve never met someone so infuriatingly cynical.”
“You’re just angry because I pointed out a fact to you and now you can’t unsee it. In fact, you voluntarily watched the movie again, and you’re pissed because you know I’m right.”
She moistened her lips. “You still haven’t proven any of those mistakes, and until you do, I’m not going to believe any of them. Besides, the Rockwell painting is old and so is Pretty Woman. With all the advances in technology, mistakes aren’t going to be a problem anymore.”
He paused for a moment, wondering how far he could push her. No, it wouldn’t be fair, would it? But she was glaring at him, challenging, and he couldn’t resist making an excuse to have the same sort of passionate discussion with her again. “Seen The Fault in Our Stars?”
She spun back to him. “Oh no you don’t! I cried through that entire movie, and I am not going to have you destroy that for me. You’re sick, Nick Katsalos. Sick, sick, sick.”
He grinned. “I wouldn’t dream of telling you if you don’t want to hear. But you did ask.”

FREE for a VERY limited time!

Barbara DeLeo’s first book, co-written with her best friend, was a story about beauty queens in space. She was eleven, and the sole, handwritten copy was lost years ago, much to everyone’s relief. It’s some small miracle that she kept the faith and is now living her dream of writing sparkling contemporary romance with unforgettable characters.

After completing degrees in Psychology and English then travelling the world, Barbara married her winemaker hero and had two sets of twins. She still loves telling stories about finding love in all the wrong places, with not a beauty queen or spaceship in sight.