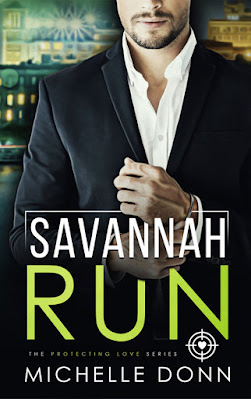 Leia Stone is in over her head and the help of a talented fixer with a dangerous past is her only chance of survival.She's just discovered her boss is in business with some of New York's most brutal criminals. Going to the FBI throws her even deeper into the dark waters of money laundering and human trafficking. A former client is the only one she can turn to.Eric Robb is a man of many talents.He's a professional fixer whose clients pay him handsomely to make their problems disappear. But now he's got a problem of his own—protecting an idealistic beauty he's never been able to get out of his head.When a ghost from Eric’s past joins the hunt they escape to the southern city of Savannah looking for a reprieve only to stumble deeper into the criminal’s web.Eric is only one man, with danger lurking around every corner will his skills be enough to keep Leia alive?•••••Savannah Run is the action-packed first book in the Protecting Love series of standalone HEA romantic suspense novels. Expect tangled sheets, car chases, and perilous rescues. A protective hero and a bold heroine 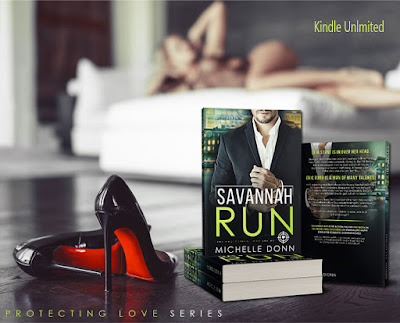 Review:
Leia is a CPA who works at a new company and finds out they are not on the up and up. She decides she needs to save people that are being hurt and starts to collect data to turn over to the FBI. What she doesn't realize is that her time is coming to an end when a bad man steps into the office. Now is her time to turn it all in, but her nerves get the best and she decides to call in an old client. Eric never forgot Leia and when she calls he doesn't understand this need to help her. Now they are both on the run and trying not to get killed. Eric has skills that you would never know and you are trying to figure out is he really the good guy or a bad guy in disguise? These two travel and try to figure out the missing pieces while waiting on the FBI, but man what a trip it is.

Michelle introduced herself to romance novels by stealing them off her mother’s bookshelf. She got caught red-handed when she destroyed a new book by dropping in the bathtub before her mom could read it. From stolen paperbacks to an overloaded iPad, Michelle’s passion for reading grew into her debut contemporary romance novel: Savannah Run.She lives in South Florida with her real-life prince charming, two dogs, two horses, a cat, and Daisy the donkey. Most evenings, you will find her floating in the pool, enjoying a cocktail, and working out the plot of her next book with her husband.Get your fix of happily ever after with a shot of action and adventure.