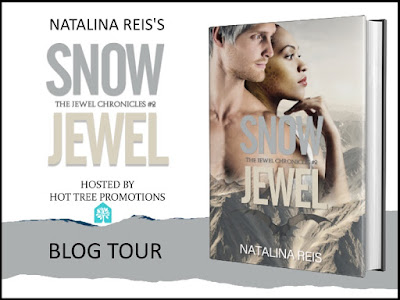 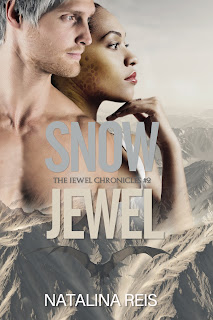 A princess on the run, an ex-slave returning home. Together they must battle prejudice and superstition if their love is to survive.

When Princess Milenda arrives at Isvärld, a land of snow and ice, she’s hoping for a quiet life with her new husband, Jaali. What she gets is anything but.

Even though happy he’s returned, Jaali’s people can’t see past the color of Milenda’s skin, a color she shares with the hated Mabaya Warriors who have been stealing and selling their children into slavery for centuries.

Freya, a goddess of the icy kingdom, tasked with protecting the princess and her man, doesn’t seem trustworthy, and their only true ally is Milenda’s flying lizard, Mjusi. But even the mutsi is acting strangely.

Will their love for each other and Milenda’s special gifts protect them from the dangers around them or will they meet their doom in the one place that promised them safe harbor?

Snow Jewel is the second book in The Jewel Chronicles. A unique interracial romance set against a breathtaking fantasy world with complex characters and twists at every turn. Let Snow Jewel take you to another world. 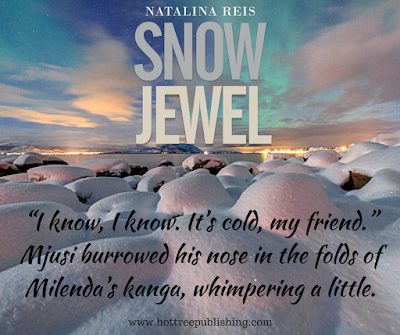 “Wait until you see the northern lights.” Jaali had come from behind, silent on bare feet, and wrapped his arms around her waist, resting his chin on her shoulder. Milenda felt immediately soothed and turned her face to lightly kiss the corner of his mouth. “When the night sky lights up with the wavering lights of the midnight sun, it’s almost as if looking into another world.”
“Midnight sun? Is that a real thing?” She wiggled in place, so her back would fit better with the curve of his body leaning against her. The sun had not fully risen, still peeking shyly from behind the white horizon and painting the snow in a rainbow of oranges and reds, the same colors of the Afrikan sun at the crack of dawn.
Jaali laughed softly. “Not really. That’s just what we call it.” He tightened his hold on her, turning his face to kiss the sensitive spot behind her ear. “The scientists call it a collision of particles. When the particles of the sun meet those of our atmosphere, it creates this amazing display of lights. It’s pretty romantic actually.”
It was Milenda’s turn to laugh. “Romantic? Particles crashing into each other? A bit too scientific to be romantic, don’t you think?” At the university in Natale, Milenda had never found the time to take science classes, other than the basic ones. Science fascinated her, but not as much as art. She’d chosen art instead.
The Fjorden’s hand starfished across her stomach, the heat of his palm making Milenda shiver in delight. From the corner of her eye, she could see the soft glare of her matangazos reacting to his touch.
“Think about it.” His soft, melodious voice blew a gust of warm air into her ear. “These particles are floating around in space, lonely and lost until they find their polar opposites. Their joining is so overwhelmingly pleasurable and fulfilling that they explode in a colorful firework of lights across the sky.”

The Jewel Chronicles
Desert Jewel
book 1
on sale for 99c