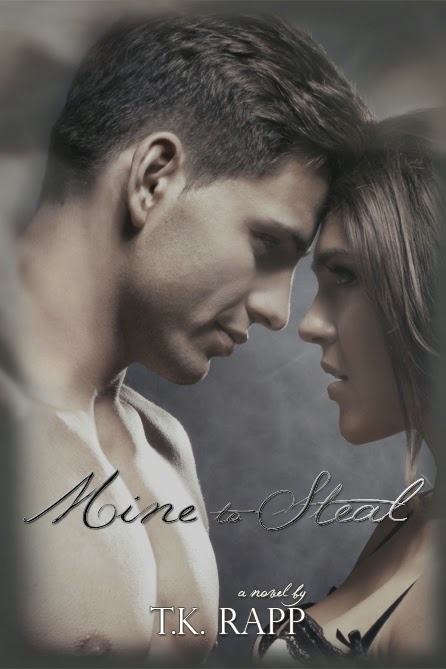 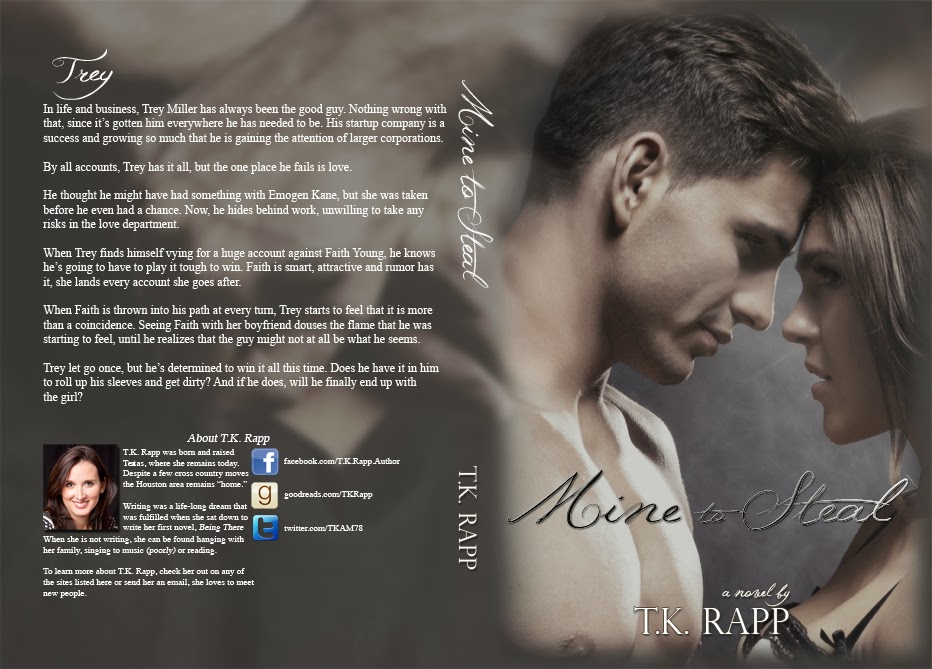 In life and business, Trey Miller has always been the good guy. Nothing wrong with that, since it’s gotten him everywhere he has needed to be. His startup company is a success and growing so much that he is gaining the attention of larger corporations.

By all accounts, Trey has it all, but the one place he fails is love.

He thought he might have had something with Emogen Kane, but she was taken before he even had a chance. Now, he hides behind work, unwilling to take any risks in the love department.

When Trey finds himself vying for a huge account against Faith Young, he knows he’s going to have to play it tough to win. Faith is smart, attractive and rumor has it, she lands every account she goes after.

When Faith is thrown into his path at every turn, Trey starts to feel that it is more than a coincidence. Seeing Faith with her boyfriend douses the flame that he was starting to feel, until he realizes that the guy might not at all be what he seems.

Trey let go once, but he’s determined to win it all this time. Does he have it in him to roll up his sleeves and get dirty? And if he does, will he finally end up with the girl? What do I have to lose? I’ve lost the girl - that I never really had - so I decide to let the old Trey appear, albeit brief. I pull her to me and she assumes I’m going to hug her. Instead, I lift her chin so she looks at me and I plant a kiss to her lips. They’re salty from her tears and for a moment, I regret sending Ryan after her.

The few times that we’ve kissed have left me torn between shoving her out the door to save her from me, and dragging her to my room to see where it might lead.

But this kiss, this is goodbye. 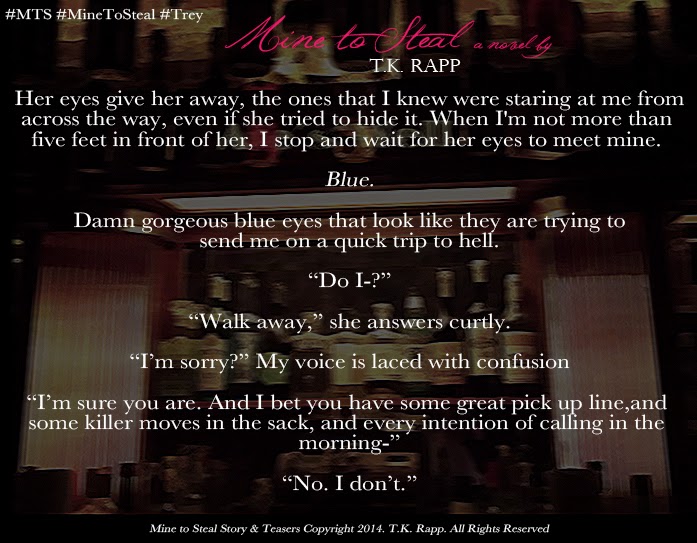 Teaser #2:
·         Her eyes give her away, the ones that I knew were staring at me from across the way, even if she tried to hide it. When I'm not more than five feet in front of her, I stop and wait for her eyes to meet mine.

Damn gorgeous blue eyes that look like they are trying to send me on a quick trip to hell.

“Walk away,” she answers curtly.

“I’m sorry?” My voice is laced with confusion

“I’m sure you are. And I bet you have some great pick up line, and some killer moves in the sack, and every intention of calling in the morning-” 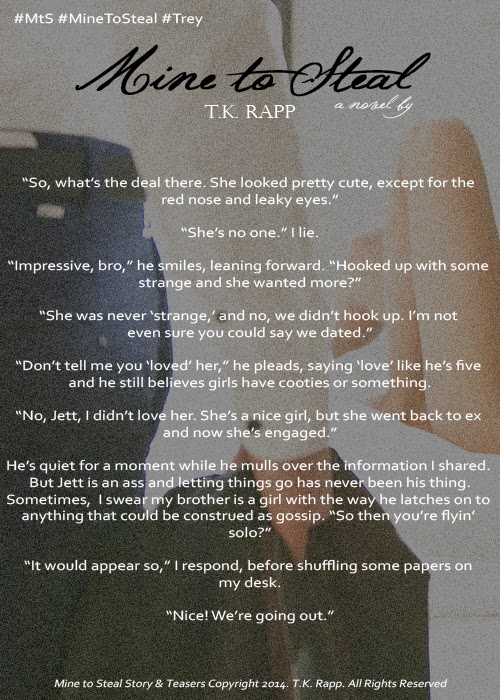 “Impressive, bro,” he smiles, leaning forward. “Hooked up with some strange and she wanted more?”

“She was never ‘strange,’ and no, we didn’t hook up. I’m not even sure you could say we dated.”

“Don’t tell me you ‘loved’ her,” he pleads, saying ‘love’ like he’s five and he still believes girls have cooties or something.

He’s quiet for a moment while he mulls over the information I shared. But Jett is an ass and letting things go has never been his thing. Sometimes, I swear my brother is a girl with the way he latches on to anything that could be construed as gossip. “So then you’re flyin’ solo?”

“It would appear so,” I respond, before shuffling some papers on my desk. 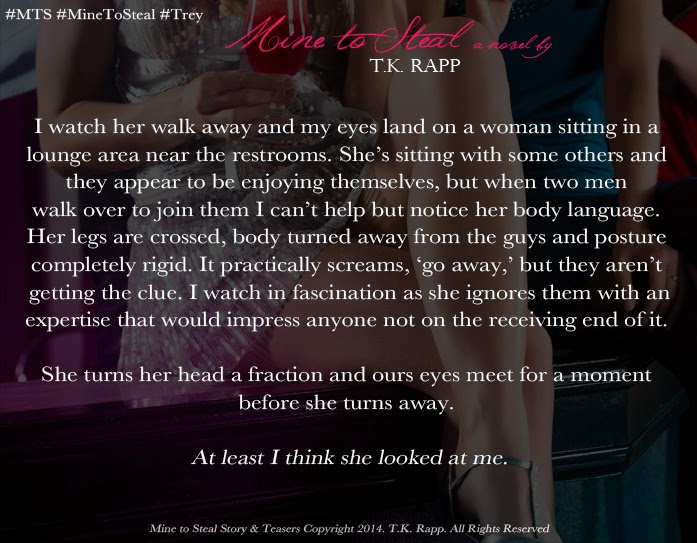 Teaser #4:
·         I watch her walk away and my eyes land on a woman sitting in a lounge area near the restrooms. She’s sitting with some others and they appear to be enjoying themselves, but when two men walk over to join them I can’t help but notice her body language. Her legs are crossed, body turned away from the guys and posture completely rigid. It practically screams, ‘go away,’ but they aren’t getting the clue. I watch in fascination as she ignores them with an expertise that would impress anyone not on the receiving end of it.

She turns her head a fraction and ours eyes meet for a moment before she turns away.

At least I think she looked at me.

Author Bio:
T.K. Rapp is a mom, a wife, a daughter, a sister, a friend - a writer. She’s a lover of music, photography and raunchy television (the raunchier, the better.) If you asked her friends what words they would use to describe her: an incurable dork, slightly awkward, loyal to a fault, a bit of a gossip, and a bit bitchy. (She tends to agree with all of them in some small measure.)

In July of 2013, T.K. published her first novel, Being There. Set in Texas, Being There tells the story of Cass, as she encounters life-altering news and the reemergence of old friends in her life. It was a lifelong dream for T.K. to write something and see it published, a feat she is incredibly proud of.

Her latest novel, Mine to Lose, was released in January of 2014. MtL is a story about Emogen Kane - who finds her relationship with her fiancé, Ryan, falling apart. She’s left wondering if they were meant to be, or if it’s time to move on.

Rapp is currently working on completing the follow-up to Mine to Lose, titled - Mine to Steal - due to release Mid-May 2014.

When not writing, T.K. can be found chauffeuring Gidget & Peese (her kids) to their various activities or hanging out with her husband.