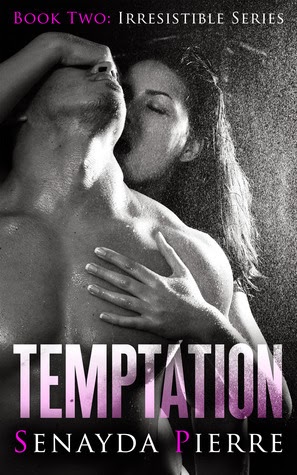 SYNOPSIS:
Book Two of the Irresistible Series
This is the story of Jaxon Wright. Popular senior in college. Math major. Rowing captain. And beloved manwhore... Temptation incarnate.
Jaxon was the King of the Campus... that is until a certain Spanish beauty named Carina Lobos walks into his life and knocks Jaxon down a peg... or two.
A year later and a lot has changed. Carina is a prominent figure in Jaxon' s life. Their relationship is on an entirely different level. Jaxon has lost his pack of hyenas and they aren't taking it well. They're looking to make Carina pay. They've been replaced by the Irresistible 8 and the men in their lives.
Jaxon is doing things he never dreamed of - the sex club has become a second home.
Can Jaxon avoid the temptation Carina presents? Will Jaxon be able to find happiness with someone who isn't Carina or will the temptation of what could be sabotage any other possibilities?
Temptation can be read as a stand-alone novel.

AUTHOR BIO:
Senayda Pierre is a native Floridian who's always had a passion for music, sports, reading and writing. Senayda currently lives in Orlando, Florida with her husband and three beautiful daughters.
Senayda is an identical twin. That's right, sometimes people give her a second glance wondering if she's the person they know! She's never seen snow... Swears she'll live in Hawaii someday... And she intends to travel the world...
Senayda's had a long love affair with reading and writing. She loved to write short stories and poetry throughout her childhood. Now Senayda's moved onto novels.
Stay Connected with Senayda:
Facebook: https://www.facebook.com/SenaydaPierre313
Goodreads: https://www.goodreads.com/author/show/7363185.Senayda_Pierre
Website: http://senaydapierre.com/