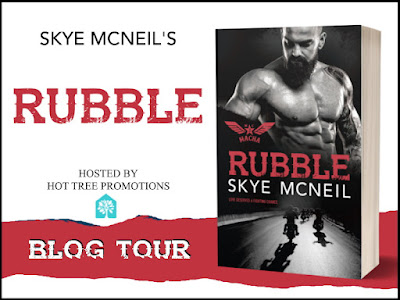 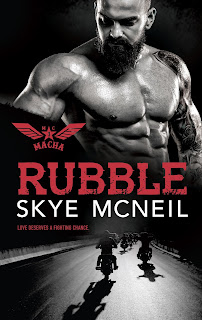 She's sworn off relationships. He has no desire to fall at all. They can only fight their attraction for so long.

Jupiter Quinn is on the run from an abusive relationship. Finding shelter in Macha MC, her goal is to keep her head down until the divorce is finalized. What Jupiter doesn’t expect is to fall for the club’s toughest man who also happens to be a former MMA fighter.

Rubble Hardy is Macha’s sergeant at arms and enforcer for the club. He doesn’t date. Never has and never will. Women are trouble and he’s not about to let down his guard. But when Jupiter Quinn walks through the club doors, his heart shifts, and the powerful desire to protect her only outweighs his feelings.

When Jupiter’s past collides with her newfound future, she’s forced to either flee or face the danger.

Can Rubble keep her safe, or will they tap out?

Tension sizzled between them. She was unable to look anywhere but his handsome face. The long, full beard summoned her curiosity and she timidly reached up, running her fingers over it. The coarse yet soft hair came as a surprise. She’d never felt one before. Not one as big as his.
Rubble pushed the hair away from her neck, focusing on her pulse there. His eyes met hers, concern evident. “If you tell me to stop, I will. I swear, Jupiter. I’ll never hurt you.”
He’d barely even touched her, but she already didn’t want him to stop. He wouldn’t hurt her. She knew it in her soul. It was evident in the way he controlled his muscular body to merely graze the skin on her collarbone. A man like Rubble could snap her like a toothpick, but he wouldn’t. Rubble couldn’t. She recognized that truth in his gorgeous eyes.
“Don’t stop,” she pleaded, tugging gently on his beard.
He moved closer. Jupiter sighed at the feeling of his warm, sweet breath on her neck. She closed her eyes the moment his lips touched her skin. For a split second, Jupiter forgot where she was. She wrapped her arms around his waist, pulling him closer still.
“Fuck, you taste as good as you smell,” he said against her neck. His tongue darted out, circling before he kissed the spot. “Brown sugar and cinnamon.”
When he switched to the other side of her neck, Jupiter’s grip weakened. Every inch of her body flooded with heat and she marveled at that small feat. No man had ever turned her on so quickly and with so little effort. He was the ignition to her flame. 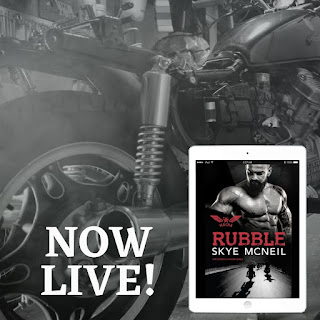 Website | Facebook | Twitter | Goodreads | Amazon | Instagram
Skye McNeil began writing at the age of seventeen and has been lost in a love affair ever since. During the day, she moonlights as a paralegal at a law firm favouring criminal law.
Skye enjoys writing romantic comedies and cozy mysteries novels that leave readers wanting more and falling in love over and over. She writes contemporary and historical novels ranging from sweet and sassy to steamy and sultry.
Her constant writing companions are two cats and two dogs. When she’s not writing, Skye enjoys spending time with family, photography, volleyball, traveling, and curling up with a cup of coffee and reading.
Sign up for Skye's newsletter HERE.