They’ve done all kinds of work, from private investigations to highly classified governmental operations. Former military, their tight-knit brotherhood is now Atrox Security. These men fear nothing, they are unwavering, unafraid, and unrelenting. They are the Undaunted Men.
*~*~*
He doesn’t want to take the job, but he has no choice. He owes a debt to the Moretti mob, and last he checked, they don’t take no for an answer.
He takes a moment to soak in the information. A pregnant mafia princess, wanted for murder, and he's supposed to track her down.
The professed father is a childhood friend, yet he’s considered a potential enemy of the family. This could get very interesting.
What starts out as a simple task, one that could easily take him one day to execute, has turned into so much more than he bargained for.
They’re each fighting their own personal demons, and it’s more than just a chase at hand. They both have secrets, hearts are on the line, and he resolves himself to go above and beyond the call of duty for reasons he can’t understand.
The last thing he ever intends on finding is an angel.
Join Quinn and Alexis as their unique story unfolds in two full-length novels released three weeks apart. You will fall in love with Kimber, a lovable retired military working dog who becomes an integral part of the storyline.
There is adventure, passion, and suspense in this contemporary erotic romance. Along with J.C. Cliff’s trademark steamy, hot sex scenes that will keep you turning the pages from beginning to end.
*CLIFFHANGER WARNING*
You know you have a love/hate relationship with a good cliffhanger in a book, but if you’ve read my previous books, you are no stranger to this simple fact.  I - LOVE - CLIFFHANGERS. I have to live up to my name, after all.
Warning: **Mature Audiences Only** This book is intended for adults of mature age only (18+). This book contains themes that could be considered offensive. 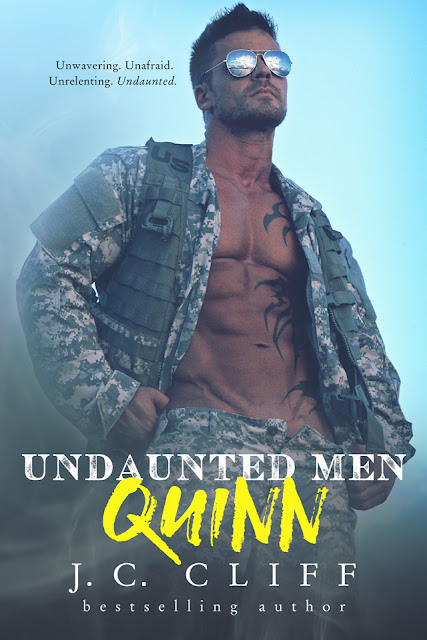 “I fell in love with Quinn in the Blyss Trilogy and I've been dying to get my grabby hands on Quinn since then, but this book far exceeded my expectations!!!” -5 Star Review #Minxes Love Books

“So sweet and funny and just an all round perfect book boyfriend.”- 5 Star Review Kolleen Book Obessions

“Like all of her reads, this will keep you on your toes from cover to cover.”- 5 Star Goodreads Reviewer 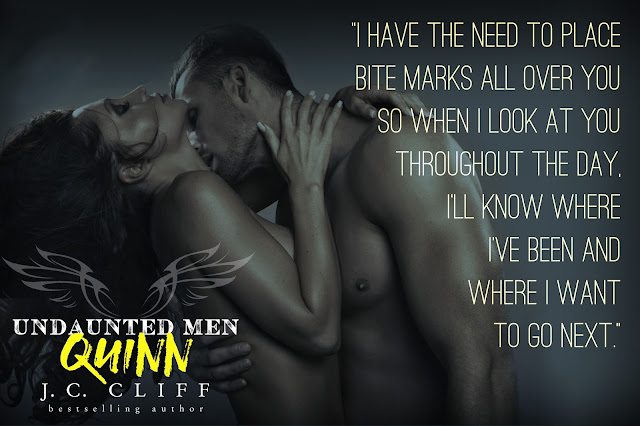 Her ample-sized breasts catch my attention. They rise and fall as she tries to catch her breath. I fist my hands into the ground as I remind myself she is a job, only a job. I can’t make this personal, but I’m mysteriously drawn to her, and I want to kiss her again. I’ve never allowed myself to spend time with a female outside of the bedroom, but I can’t help but enjoy being around her. None of the women I’ve ever been with are anything like Lexi. Maybe subconsciously, I’ve avoided her type all along. It’s easy to push the shallower females out the door the next morning. I’m lost in her brown, flecked eyes when her hands come to rest on my pectorals, pulling me from my thoughts. “What are you thinking about?” she softly whispers. The air between us changes, turning into something more. “Where’d you go?” What do I say? I’ve only known you for a couple days, and I don’t think you’re a killer? I want to kiss you like I did that first morning, even though you’re pregnant with somebody else’s baby. How fucked up is that? “I’m thinking of that kiss we shared our first morning,” I huskily whisper the half-truth over her lips. “Oh,” she breathes out, instantly sobering from her joviality. When she bites her lower lip, I reach down and gently disengage it with my thumb. “Define your ‘oh’,” I challenge, and watch as her breathing pattern changes. “Yeah, it was nice,” she exhales. “Just nice?” I counter. “Maybe I didn’t do it right then,” I rasp in a deep undertone, wanting a second chance at those lips. 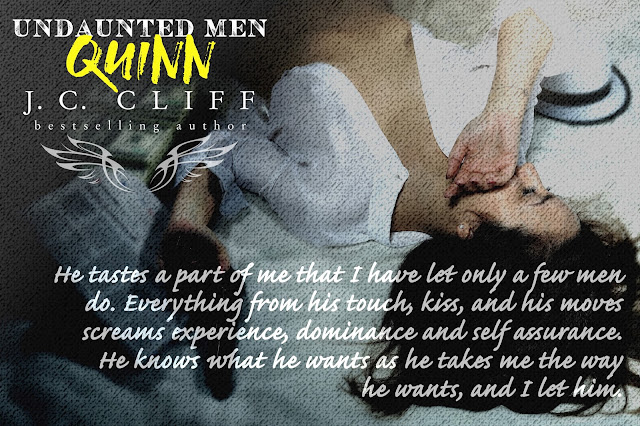 I'm full of overwrought tension, and my fingers curl into a fist against his chest. “Please, don’t let me go,” I whimper, wishing he had a shirt on so I could twist it in my hands. I don’t know what to do with all this nervous, displaced energy. “Shh, baby, I’m not going anywhere,” he softly assures me. He takes my fidgety hand in his and holds it tightly against the center of his chest, stilling my movements. “I’m right here. Everything is going to be all right now.” The assurance and warmth of his voice washes over me, and the way his strength surrounds me, I begin to settle down. Being wrapped in his arms this way, he feels like a familiar lover, I don't perceive him to be the stranger he actually is.

Who doesn't like a good mafia/military book right? Mafia Princess Alexis got caught up in a raw deal with someone she loved and trusted. When her best friend comes to her rescue and helps her escape the true story will unfold. However her father will call in a mark and that mark is Quinn. And holy hell if the cover doesn't do it for you then his description and story will. Quinn ex-military and knows what he's doing. When he is asked to go after the princess he is not sure what he is in for. He thinks she's up tight and goody goody, however she will surprise him at ever turn. He will learn why pieces of her both mentally and psychically. But the dangers are not behind her and they will soon find out that Quinn is not the only one searching for her. Can he save her? Will she be able to trust Quinn with her life? 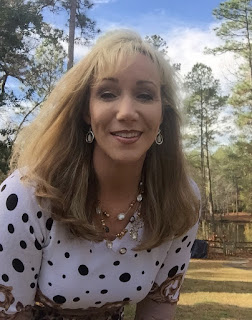 The one thing JC works most hard at is steering clear of the typical romance templates. JC Cliff likes her plots to be unique, one of a kind, and never read before storylines. JC Cliff is an independent author who enjoys creating page turning novels from the moment you pick up the book until the last page is read. She loves a good book full of mystery, intrigue, scorching hot romance, and all the elements of suspense. She's a die hard 80's rock'n roll fan, and loves a good concert! JC wears many hats. They include being a wife of 24 years, 4 children, a small business owner, writer, reader, and what ever else is required of her. She loves taboo stories with twists and turns, and full of suspense. She likes to spend her time with her family and friends. Her pastimes include: offshore fishing, learning anything new, sewing, spending time at the beach, or the mountains. If you're interested in getting your hands on an advanced release copy of her upcoming books, sneak peek teasers, or information on her upcoming personal appearances, and sales, you can join her newsletter list and get those details delivered right to your inbox! 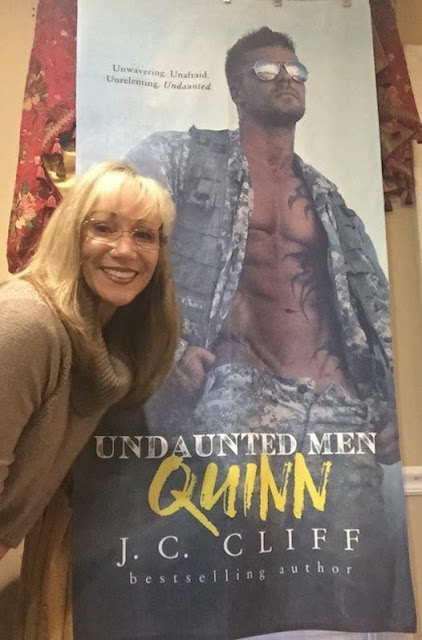 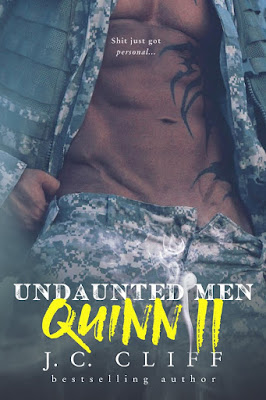 They’ve done all kinds of work, from private investigations to highly classified governmental operations. Former military, their tight-knit brotherhood is now Atrox Security. These men fear nothing, they are unwavering, unafraid, and unrelenting. They are the Undaunted Men.


*~*~*
He never wanted to take the job, but he had no choice. He owed a debt to the Moretti mob, and last he checked, they didn’t take no for an answer.
Lexi has no phone, no camping experience, and there’s no way to get her back except to track her down. He's put it all on the line…his heart, that is, and she's run away with it.
He will do anything to protect what is his, and when Lexi blurs the lines between trust and betrayal, she turns his life upside down. He is left to wonder if she ever truly was his angel.
Neither Quinn nor Alexis will ever be the same after surfacing from those mountain trails. They survived the wild, but can they survive each other? 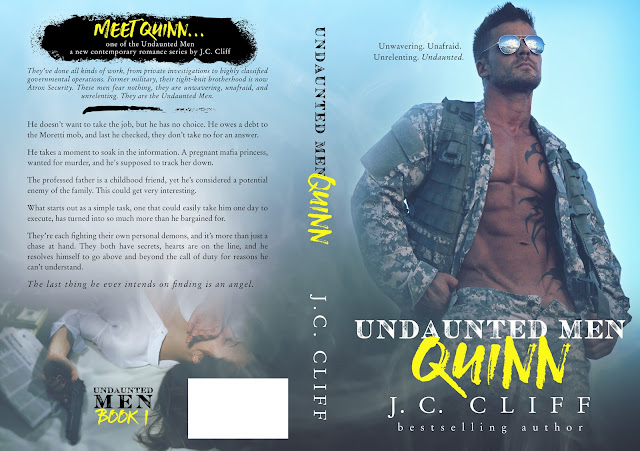