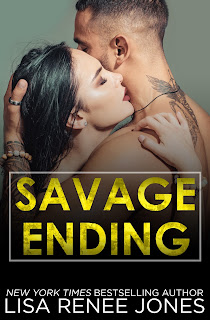 Title: Savage Ending
Series: The Savage Series #4
Author: Lisa Renee Jones
Release Date: April 25, 2021
The fourth and final book in the Savage Series...
They say all is fair in love and war, but I really don't give a damn about fair. In fact, when protecting those I love, fair is the last thing on my mind. Now that I'm back in Candace's life, those who have used her to try to control me, may well put up a final fight, but they will not win. They will lose and badly.
BUY SAVAGE ENDING
Amazon → http://mybook.to/SavageEnding
Apple → https://apple.co/3qFfc7j
Nook → https://bit.ly/3hzobks
Kobo → https://bit.ly/3ht4KtK
Audible → http://adbl.co/2NQ3l7O
Paperback → http://mybook.to/Savage4PB 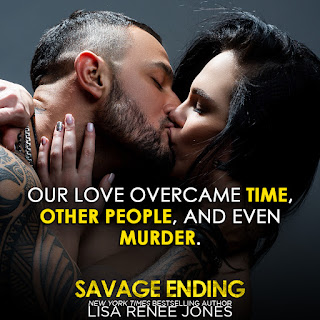 EXCERPT
I stand willingly in front of Rick, naked while he is not. His gaze is hot, intimate. When his eyes meet mine, he says, “You hesitated.”
“I did not hesitate,” I say, closing the space between us and pressing my hand to his jaw. “I was thinking about the very first time you told me to undress for you. Do you remember?”
Tension slides from his shoulders as if my answer is the exact one he needs, and he wraps his arms around my waist. “I remember that night well.” His voice lowers seductively. “I spanked you.” His lips curve. “And you liked it.”
“Are you going to spank me now?” I dare, so far from intimidated by anything that happens between me and this man. He demands. And I have learned over time that while it defies my strong will and independence in the bedroom, I like when he’s in control.
“Not tonight,” he says, easing me onto his lap so I’m straddling him.
I wrap my arms around his neck and he adds, “All or nothing.”
“All or nothing,” I repeat.
His lashes lower, the lines of his face sharp. “I’m still Savage, Candace,” he says, his eyes meeting mine again. “That part of me still exists.”
“Why are you saying this?” I ask.
“Because this mission, this blast from the past, reminded me of who I am.”
“And you think I need to be reminded?”
“Yes,” he says without hesitation. “You do. You're about to marry me.”
“I’m marrying the love of my life. And that’s you, Rick. All of you.”
“Love is blind.”
“I know who you are, Rick Savage. And for the record, you can’t deny who you are. Not and live a happy life. And I don’t want you to deny who you are. That’s never been my message.”
“I know that, too,” he says. “But I’ve tried anyway.”
That one statement terrifies me. I’ve tried anyway. It’s like a ball rolling toward a waterfall in slow motion, but eventually, it tumbles over the edge. My hands go to his shoulders, his muscles flexing beneath my touch. “That’s a problem for us. It’s a big problem.”
I try to climb off of him, but he catches my waist with a powerful arm around my body. “It’s not a problem,” he insists.
“No one should marry someone they can’t be themselves with. Every time you think you have to be something you’re not for me, it divides us.”
“I don’t want to be something I’m not with you, Candace. I want to be a better man for you.”
“I just want you to be you.”
“I want to be a better man for me, too. But you know, sometimes some people just need to die, Candace.”
I blink with the sudden shift from being a better man to wanting to kill someone. But that’s the point of all of this. That’s where he was taking me and us.
I’m flying blind right now, unsure about what happened to place him in this state of mind, but I know one thing: Rick is a good man. He doesn’t kill for money or pleasure. “I love you, Rick Savage. Be who you are and do what you do for the right reasons. And you do. Always.”
“Even if it means hunting down a bastard and killing him?”
He says it so matter-of-factly, but I know him. It’s anything but. Someone has made Rick’s personal hit list. There are no names on that list, at least, none that are living. “Can it be after the honeymoon?” I ask, quite seriously.
He laughs and cups my head and presses our foreheads together. “You really get me, don’t you?”
My hand finds his face. “And you get me. Rick—”
I never finish my sentence. I don’t even remember what I was going to say. He pulls me closer and claims my mouth, and it’s a tender kiss, a kiss void of the dominance I’d expected from him only minutes before. I moan with the sensations that spiral through me and just that easily, the air shifts, and our mood darkens, roughens. Suddenly, we are wild, kissing as if we will never again. Touching each other everywhere, and I’m tugging at his shirt. He pulls it over his head and tosses it, and my gaze falls on the heart that says San Antonio in the center, the heart I know he got for me. Because that’s where we met, that’s where he left me and found me again.
My fingers curl on top of it and I whisper, “You really never forgot me.”
“Never,” he says, and as our eyes collide, he says it again, a rasp of emotion in his voice. “Never.” And then he’s kissing me again and I’m touching him and arching into him...
Review:
Blown away by this book. I am so glad we got to read more of this series. It really kept you on your toes. And Savage and Candace well I loved them so much. Sometimes you need trials and tribulations to see what's right in front of you. And these two will go through it all until the end. What happens when you are about to marry the love of your life and you have to go on a mission? Well, everything breaks apart, but these two will fight so hard for it all. This book is action-packed full of love, lust, mystery, drama, and HEA. 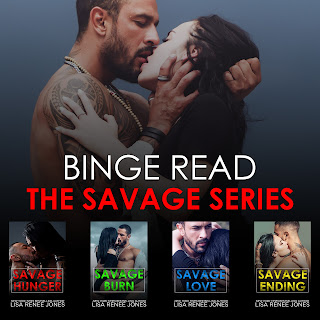