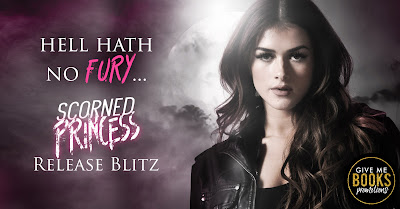 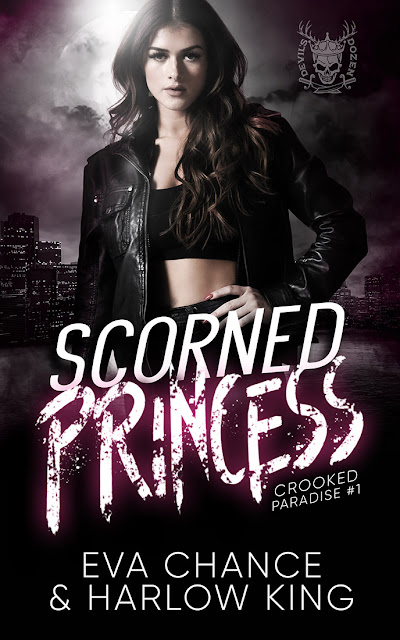 Hell hath no fury...
I thought I was trading one evil for a lesser one. Marry a man I might eventually love, forge an alliance between his gang and my father's, and get out from under Dad's sadistic thumb.
Turns out my fiancé has other plans. Like slaughtering me and my entire family the night before the wedding.
I make it out alive, left with nothing but a thirst for vengeance. But if I want to crush the prick who betrayed me, I have to turn to the biggest pricks of them all.
Hot, cocky, and dangerous, Wylder Noble and his men rule Paradise Bend. Their help doesn't come cheap. I've got to prove I'm strong enough to deserve it.
Whatever they throw at me, I can take it. No taunting words or scorching looks will break the wall around my heart.
They think I'm made of glass? I'm a girl of shards that can cut you to the bone.
Before this is over, someone's going to bleed. And this time, it won't be me.
*Scorned Princess is the first in a new gritty contemporary romance series from bestselling author Eva Chase (writing as Eva Chance) and Harlow King. No major triggers, but be prepared for domineering men who make their own rules, a rebellious heroine who's not afraid to get her hands dirty, and an enemies-to-lovers romance where the girl gets all the guys. It's going to be a wild, bloody ride!* 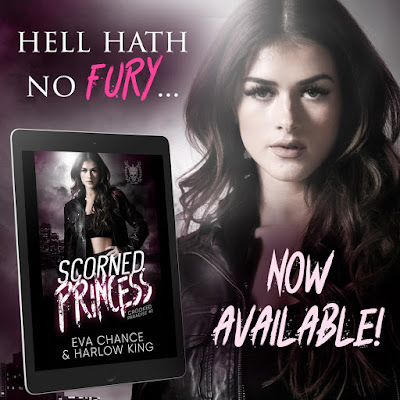 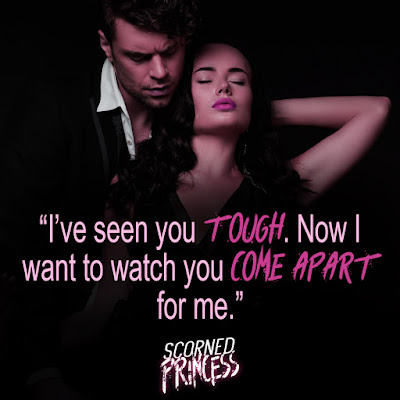 EXCERPT
As I sauntered over, I added a little sway to my stride. I planted myself right in front of the guy. His eyes lingered on all those gaps in the dress, his tongue slicking over his chapped lips with a lecherous grin. Ugh.
"I’m looking for money, Trent," I said, giving him a sickly-sweet smile. "You owe the Nobles quite a lot, and you haven’t been paying up."
A rush of murmurs and a little laughter spread through the crowd. Trent scoffed at me. "And they sent you to collect it?"
"Damn right, they did. Now are you going to hand it over or what?" I made a grabby gesture with my hand.
"Forget it." Trent leaned back in his chair, propping his feet up on a crate. "I don’t owe the Nobles shit. I’m my own man now."
I cocked my head. "I don’t give a crap about your delusions of grandeur. I just want the money you owe. Now stop acting like a pussy and pay up."
That riled him up good. His eyes flashed, and the others fell silent. He kicked aside the crate and sprang to his feet. "Talk to me like that again, bitch, and you’ll be the one having delusions."
I wondered if he had any idea what that even meant, because that threat hadn’t made a whole lot of sense. I sighed. "Well, if you want to do this the hard way, that can be arranged. But are you sure you want me embarrassing you in front of your dickhead friends?"
One of the guys let out a grunt of protest. Trent held up his hand, openly seething. "What exactly do you think you’re going to do, you trumped-up whore?"
I let another smile, much sharper, cross my lips. "Let’s not get to that. Imagine what your master will say if he hears that one of his lapdogs has forgotten who’s in charge? If that ego inflates any more, your head might explode."
"I’m not a lapdog," Trent roared. He reached into his jeans, and before I could blink, he was pointing a gun at me. "You’re going to die, bitch."
Did he think he was the first man to ever aim a pistol at me? I eyed it calmly, my pulse only stuttering momentarily.
I could handle this. I’d faced so much worse than he could imagine.
Trent jabbed the gun at me. "What do you have to say about me now, huh?"
I fluttered my eyelashes at him. "Now you’re a dog with a gun."
Wylder was probably intending to rush in here the second the asshole released the safety. But I had other ideas. He wanted to see what I was made of? I could kick plenty of ass all on my own.
Before Trent could react to my insult, I snatched his wrist and twisted so swiftly the gun tumbled from his fingers. As the men around him leapt to their feet, I finished him off by yanking him toward me—right into my knee, which happened to be ramming straight at his crotch.
He started to crumple, and I bashed my elbow into his nose for good measure. The bone crunched with a spurt of blood.
Oh dear, I’d stained this pretty dress. What a shame. 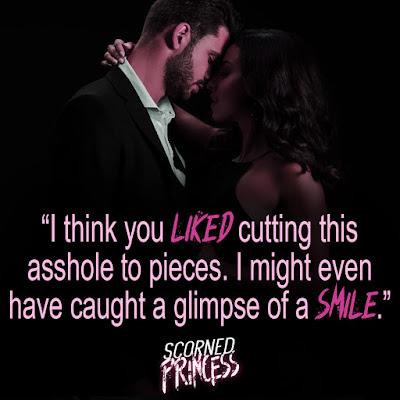 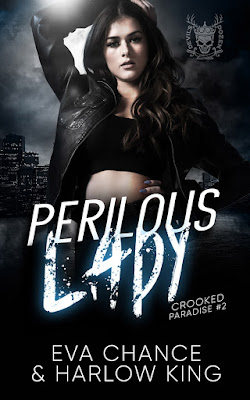 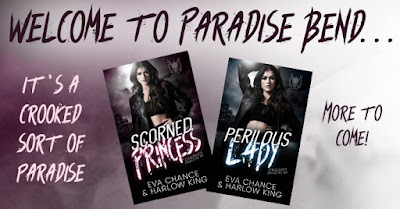 Eva Chance is a pen name for contemporary romance written by Amazon top 100 bestselling author Eva Chase. If you love gritty romance, dominant men, and fierce women who never have to choose, look no further.

Harlow King is a long-time fan of all things dark, edgy, and steamy. She can't wait to share her contemporary reverse harem stories.
FACEBOOK 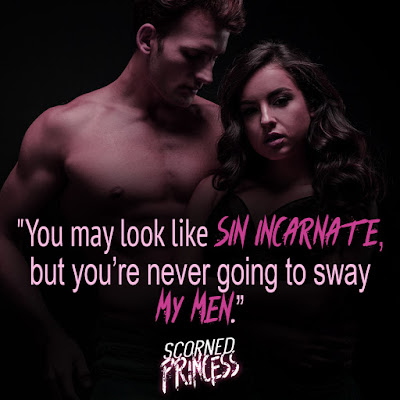